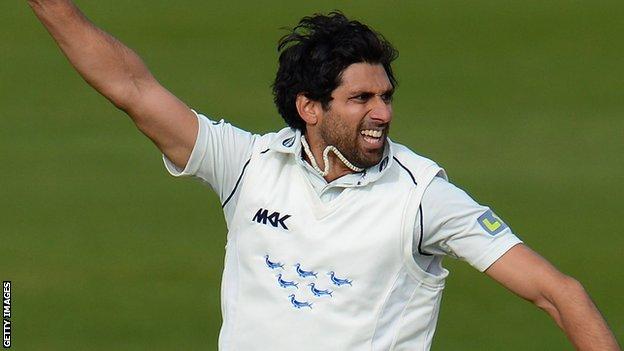 Amjad Khan took a season's-best 5-25 to hand Sussex the initiative on day one of their County Championship clash with Middlesex at Hove.

After Steve Magoffin (3-45) made early inroads, Khan ripped out the Middlesex middle order as they slumped to 65-6.

Ollie Rayner (32) steadied the visitors before 34 from Tim Murtagh helped Middlesex to 170 all out.

That represented a good day for Sussex, who have climbed into title contention on the back of three successive home wins.

But the hosts needed some good fortune, with Joyce twice dropped by Dawid Malan at second slip as he closed in on a half-century against his former county.

After being put into bat on a pitch that offered pace and bounce to the seamers, Middlesex saw both Chris Rogers and Joe Denly removed by Magoffin.

Sam Robson and Malan appeared to have steadied things, only for Khan to claim three of four wickets that fell for nine runs.

He returned to remove both Rayner and Gareth Berg after a seventh-wicket stand of 54, while Magoffin finally ended Murtagh's resistance but not before he had top-scored for Middlesex despite coming in at number 10.

"Sussex edged the first day but could well go on to dominate on the second.

"Having put Middlesex in, they racked up six wickets before lunch and will be slightly disappointed that it took until tea to finish the job off.

"The pitch offered extra pace, bounce and seam and no batsman looked in with the Middlesex number 10, Tim Murtagh, top scoring with 34.

"Ed Joyce finished unbeaten on 49 but was dropped twice at second slip off Murtagh's bowling.

"A couple of early wickets on the second day will tighten the game up but Sussex will hope they can get their heads down for a useful lead."