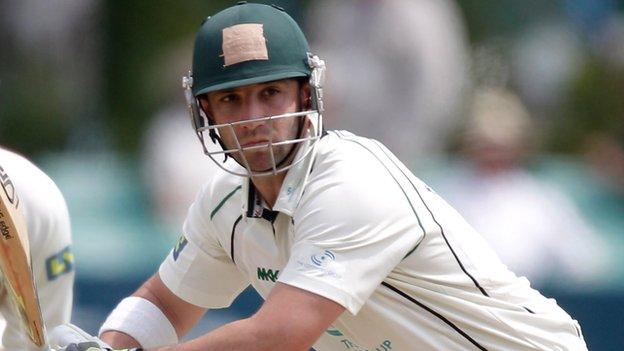 Worcestershire opener Phil Hughes carried his bat for an unbeaten 135 against Warwickshire as wickets tumbled in the Midlands derby at Edgbaston.

After looking in trouble on 73-3, Vikram Solanki (57) helped Hughes put on 124 for the fourth wicket.

But then, from 239-5, the visitors lost their last five wickets for seven runs to be bowled out for 246.

The Bears then began badly, slumping to 19-3 as old boy Alan Richardson struck twice before the close.

Australian left-hander Hughes is the country's leading scorer in both the CB40 and the FL t20, yet had made only two fifties in seven Championship innings.

But his first Championship century for relegation battlers Worcestershire placed another obstacle in Warwickshire's path to a first title win since 2004.

After five games without a win, the Division One leaders would have hoped for an easier ride against their local rivals.

But, after Hughes had brilliantly transferred his prolific one-day form into the Championship to earn his 18th first-class century, worse was to follow for Warwickshire.

Inside eight deliveries at the end of the day, Varun Chopra and Ian Westwood were both out leg before for second-ball ducks.

Newcomer Chris Russell removed Westwood, while Richardson disposed of Chopra before having William Porterfield taken in the slips to leave the Bears 10-3.

Only when Hughes was joined by Solanki did batting look comfortable, although conditions may have become a little easier after a morning session in which the ball swung for Warwickshire's seamers.

Joe Leach, one of three Championship debutants in Worcestershire's team, was out for a duck.

But Brett D'Oliveira (grandson of the great Basil and son of Worcestershire's assistant coach Damien) fared better, one of only four visiting batsmen to reach double figures with 19.

"Between the two sides, the last eight wickets of the day went down for just 17 runs.

"The ball moved a lot early on and Worcestershire's young batting line-up struggled, apart from Phil Hughes, a 'veteran' at 23 and Vikram Solanki, showing what the county will miss next season.

"He came in at five, as Worcestershire look to the future, but it's a tough and steep learning curve for young players in Division One cricket."