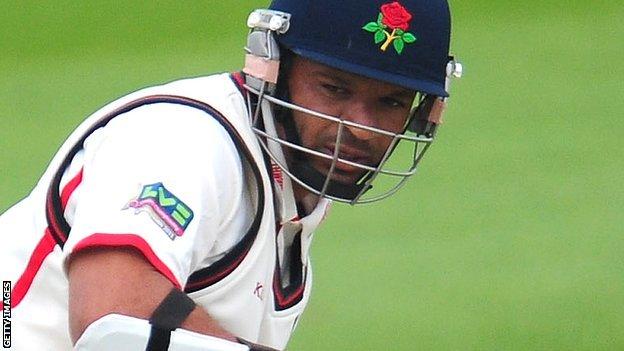 Lancashire's Ashwell Prince hit a century to ensure that Somerset must make the biggest total of the match to win at Aigburth.

But Prince added 98 for the seventh wicket with Kyle Hogg (38) and was eventually last out for 129, by which time he had guided his side to 242.

Arul Suppiah was the man out, trapped leg before by Lancashire captain Glen Chapple.

That was a good end to the day for Lancashire, who began the day disastrously, losing six wickets inside 18 overs.

But Prince took full advantage of being dropped by Alfonso Thomas off his own bowling on six to register his fourth century for the county in 45 innings and give them hope of securing a final-day victory that would ease some of their relegation worries.

"It was a pleasure to watch a brilliant Ashwell Prince bat Lancashire back into the game.

"I'm sure he's hit finer centuries in grander surrounds but his 129 was desperately needed by his team-mates and hugely appreciated by the supporters at Lancashire's outground in Aigburth.

"It was a wonderful innings and he was superbly supported by Kyle Hogg, who hit a vital 38 and shared in a partnership for the seventh wicket worth 98.

"The Red Rose today showed the fighting spirit that's required between now and the end of the season. The question is can they wrap things up on the final day?"