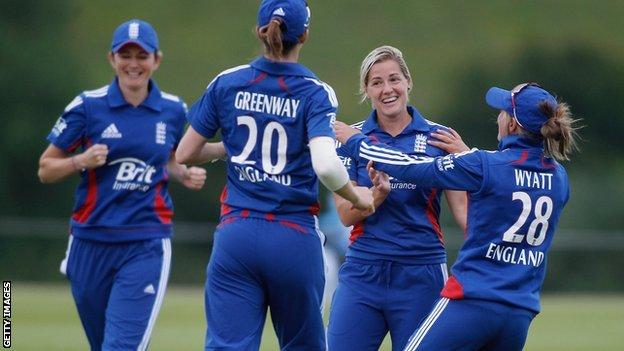 England have named a 14-player squad for the ICC Women's World Twenty20 in September and October.

Somerset's Anya Shrubsole returns in place of Georgia Elwiss, the only change to the squad that dominated India in two T20 matches in June.

Missing from the squad that competed at the 2010 tournament are Claire Taylor and Nicky Shaw, who have retired.

England, winners in 2009, face Pakistan, India and Australia in the group stages in Sri Lanka.

They will prepare for the World Twenty20 with a five-match T20 series against West Indies, starting on 8 September at Durham.

Ahead of the series against West Indies, England will play two international T20 matches against Pakistan followed by an additional fixture against the England women's Academy.

Clare Connor, head of England women's cricket, said: "This schedule of matches against Pakistan and West Indies is excellent preparation in the immediate build-up to the ICC World Twenty20.

"After an unbeaten run spanning 17 months in international T20 matches, competition for a place in the starting XI has never been stronger."