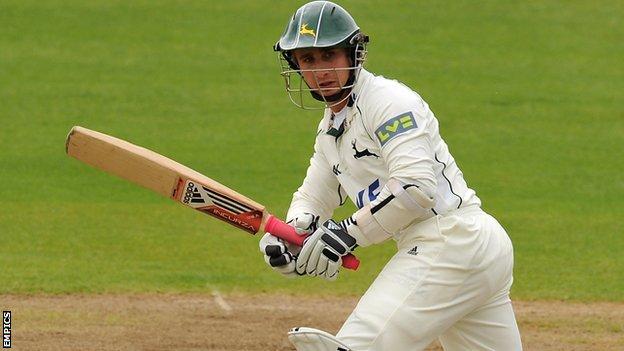 Nottinghamshire's James Taylor celebrated his England call-up in style by making 163 not out against Sussex.

Taylor, who could make his Test debut against South Africa on Thursday, added 57 runs to the 106 he made on Saturday.

He helped Nottinghamshire to a mammoth total of 520-4 as his side claimed a first-innings advantage of 349 runs.

However, Chris Nash (79 not out) and Ed Joyce (63 not out) helped Sussex to 146-0 in their second innings as they battle to save the match.

Sussex need to score a further 203 runs on Monday to avoid an innings defeat as Nottinghamshire push for their fifth victory of the season, a win which could take them back to the top of Division One, depending on the result of the Warwickshire v Surrey game.

Nottinghamshire resumed on 443-4 and Taylor, who has been drafted into England's squad to replace Ravi Bopara, fired 21 fours and a six in his 265-ball innings to make his highest total of the year.

James Anyon struggled for Sussex as he conceded 102 runs from his 17 overs, while Monty Panesar also recorded figures of 0-89.

But Nash and Joyce saw the visitors end the day on a positive note as they produced a resolute display to frustrate Nottinghamshire's bowlers.