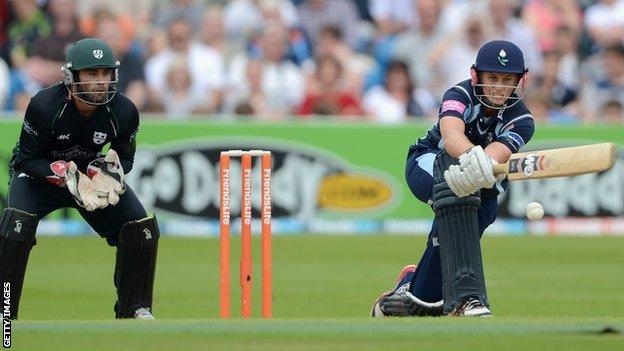 Yorkshire reached the finals day of the FL t20 for the first time as they beat Worcestershire by 29 runs.

Joe Root scored 65, David Miller added 50 and Gary Ballance made 46 not out as Yorkshire reached 212-5, their highest total in this year's competition.

Worcestershire fell to 20-2 in reply as they quickly lost both openers, Vikram Solanki for one and Moeen Ali for 17.

Australian Phil Hughes hit an unbeaten 80 off 53 balls but the visitors could only score 183-6 off their 20 overs.

Worcestershire have now lost in the T20 quarter-finals on three occasions after previous defeats against Surrey in 2004 and Gloucestershire in 2007.

Yorkshire won the toss and elected to bat but Phil Jaques (2) was run out early on.

However, captain Andrew Gale scored 30 off 23 balls, Root hit 65 off 40 deliveries, Miller only needed 25 balls to reach a half-century and Ballance hit five sixes in his 20-ball innings of 46.

Yorkshire's total was the joint-third highest by any team in this year's competition and Worcestershire were always struggling to keep up after losing two wickets in their first three overs.

Hughes, the competition's leading run scorer, took his 2012 FL t20 total to 402 runs from eight matches as he passed 50 for the fourth time.

But wickets fell at regular intervals at the other end as Worcestershire finished 29 runs short.

"If I was to be critical it would be the bowling and we didn't execute very well. We got off to a bad start and conceded nine sixes in the last 25 balls which gave them a cushion.

"Yorkshire deserved to go through but we can hold our heads up and, although it wasn't close, we still got a decent total ourselves.

"It has been a good campaign and we've learned a lot from it.

"Phil Hughes' knock was tremendous but he is gutted he didn't get another 30 runs to win the game for us. He has been awesome in this competition and he did a great job but it was just too many runs to get."