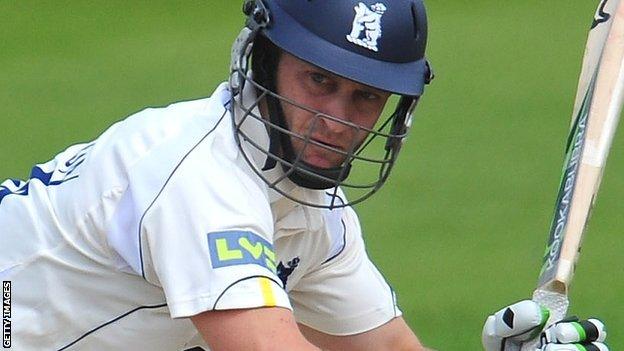 Jim Troughton led the way for Warwickshire as the Championship leaders had the better of the first day against Surrey at Edgbaston.

But Troughton (74 not out) teamed up with Richard Johnson (49) to put on 98 for the fifth wicket.

It was another good day for the Division One leaders who have so far banked three batting bonus points and are 28 shy of a fourth.

After Warwickshire dominated the opening session, Surrey hit back in the afternoon with Murali Kartik (1-39) and Gareth Batty (1-51) providing support to Meaker and Jordan.

But Troughton ensured it was Warwickshire's day. He made only 50 runs in his first nine innings this season, but has since made 81 against Sussex and 132 against Somerset, before his so far unbeaten 74.

"A hard-fought opening day at Edgbaston and both sides will be satisfied with their efforts.

"For the home side, Varun Chopra and Ian Westwood both played well and then captain Jim Troughton held the innings together.

"But Surrey never gave up with the ball and bowled very well as a unit. Chris Jordan and Stuart Meaker were the pick, but they all did their job.

"Surrey will be looking to finish off the Championship leaders as quickly as possible on Saturday morning. They then have to bat well on a good surface."