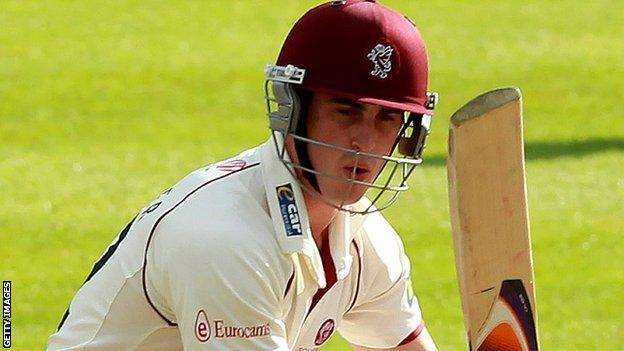 Craig Kieswetter smashed a century as Somerset beat Championship leaders Warwickshire by one wicket at Taunton.

The result brings Somerset into the County Championship title race and they are eight points behind leaders Warwickshire, but have played a game more.

Warwickshire lost top scorer Varun Chopra (32) in the day's fourth over and added only 58 runs to their overnight total.

But Compton and Kieswetter put on 166 in 43 overs to take the hosts close to victory.

Kieswetter hit seven sixes and 14 fours in his 170-ball innings and, when he was caught by Chris Woakes off Barker, Warwickshire fought themselves back into the game.

In the end it was Trego who brought the game to a close when he hit Jeetan Patel to the long-on boundary to see Somerset to the narrowest of victories.