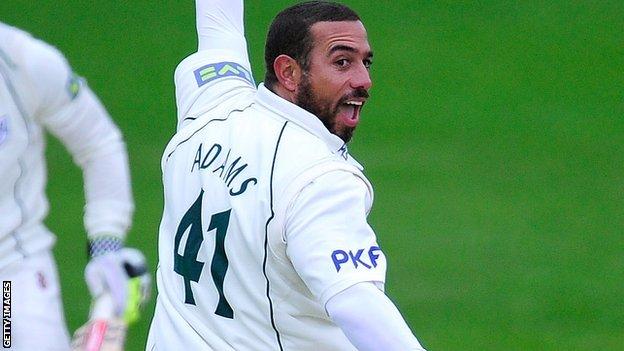 Andre Adams became the first bowler to reach 50 Championshp wickets this season as Nottinghamshire and Surrey settled on a draw.

Notts are now a point behind Warwickshire,

But the West Midlands side still have a game in hand, and the two sides meet each other twice in the last three games of the season.

In the morning session Voges and Read took their sixth-wicket stand to 145 in 34 overs, before Voges was trapped lbw by a Jon Lewis (2-64) inswinger.

Read was then joined by Phillips and the pair added 75 in 15 overs. The Notts skipper, who later had to leave the field when wicketkeeping after taking a knock on the left index finger, fell two shy of a second ton of the campaign.

Notts expect Read to be fit for Sunday's CB40 match with Scotland at Trent Bridge.

Burns got Surrey's chase for batting bonus points off to a good start and put on 85 with Zafar Ansari (32) for the first wicket.

Roy then smashed 83 from 50 balls, including eight fours and five sixes, before he was stumped by Riki Wessels, deputising behind the stumps for Read.

Surrey then stumbled from 167-1 to 215-6 as Adams reached 50 Championship wickets for the season, before Meaker (29 not out) helped the visitors to a second batting point.

"Whilst it was disappointing that the two camps couldn't agree on a final-day run-chase, the cricket they served up instead more than compensated.

"Excellent batting from Read, Voges, Burns and Roy in particular, with plenty of short cameos from others.

"There was wonderful bowling from Meaker and Adams who, after a quiet start, sprang into life to become the first bowler to 50 Championship wickets this summer.

"The news from elsewhere made it a decent day for Notts, who are now the only unbeaten team in Division One."