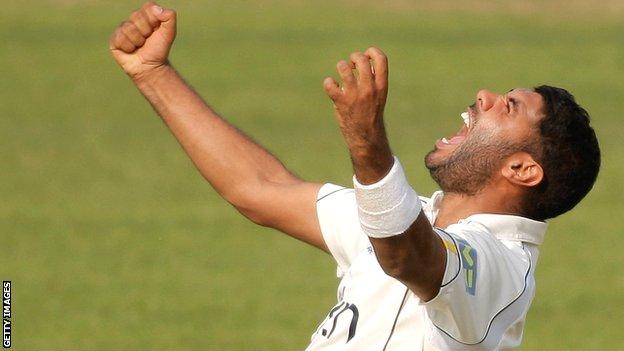 Jeetan Patel's career-best figures of 7-75 has put Championship leaders Warwickshire in a strong position against Somerset at Taunton.

The visitors made maximum batting points with 400 all out, Jim Troughton (132) failed to add to his overnight score, Alfonso Thomas took 6-60.

Patel then did most of the damage as Somerset were dismissed for 254, Nick Compton top-scoring with 73 not out.

Warwickshire closed on 66-3 in their second innings, a lead of 212 runs.

"After most of the first day was washed out, this game has moved on rapidly leaving a positive result still possible for either side.

"Warwickshire hold the cards and much will depend on how briskly they score in the morning session and how much they're prepared to gamble in setting Somerset a target.

"Although they won't want to give one of their Championship rivals a chance to close the gap, they will believe that, given time, Jeetan Patel can spin them to victory.

"In the first innings the New Zealander seemed to be extracting increasing turn out of a Taunton pitch which has been baked by rare sunshine over the past two days."