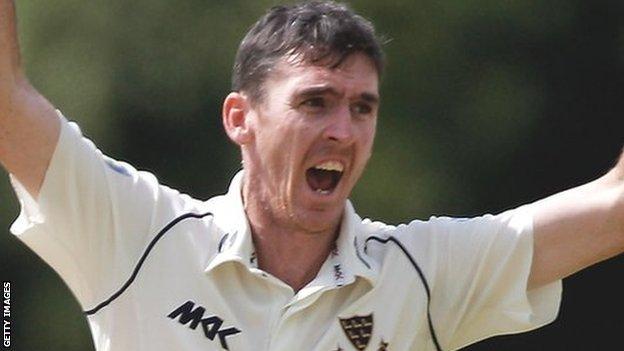 Steve Magoffin took his first-class tally to 275 wickets to help Sussex into a strong position against Durham.

The visitors resumed on 92-4 and Magoffin (3-28) took the key wickets of Paul Collingwood for nine and Dale Benkenstein (43).

"Scott Borthwick celebrated his selection for England's World Twenty20 squad with his first 50 of the season, and those runs could prove vital as Durham added 134 for the last five wickets.

"Steve Magoffin again showed his value to the Sussex attack - his 22 overs costing a miserly 28 runs and claiming three wickets.

"Sussex will be looking to the experience of Murray Goodwin and skipper Mike Yardy to firstly reduce those arrears and then build a decisive lead.

"The weather looks set fair and, with the pitch taking some turn, we could have an intriguing couple of days ahead."