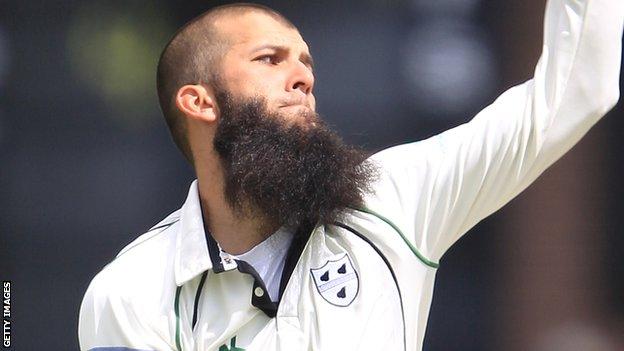 Led by top scorer Paul Horton (34) the home side eased to 61-0, but then lost nine wickets for the addition of 58 runs as Moeen finished with 6-67.

Worcestershire closed on 9-0 in their second innings, leading by 138 runs.

The visitors, who are without a win in the Championship this season, last won a four-day match when beating Lancashire late last summer.

Moeen and Choudhry finished with figures of 10-105 between them on an almost perfect day for Worcestershire.

"A tough day for the defending champions which in many ways echoed Wednesday's play.

"Just like Worcestershire, Lancashire made a solid looking start to their first innings, but then a couple fall just before lunch and more shortly after.

"The big difference was that the visitors managed to put together one good partnership and, at the minute, that stand by Matt Pardoe and Ben Scott for the seventh wicket worth 127 could prove crucial.

"A good effort though by Kyle Hogg and Simon Kerrgian to get Lancashire past the follow-on target, but it leaves them with plenty of work to do with the ball on Friday morning."