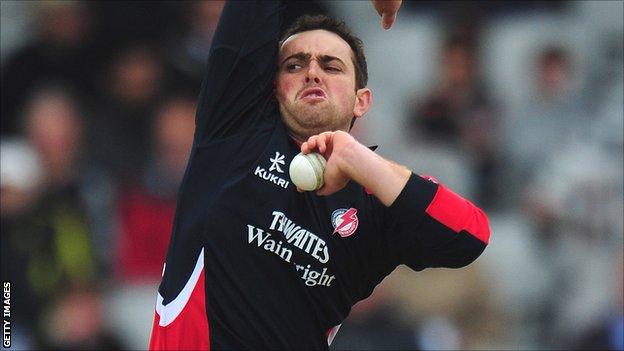 Stephen Parry believes the CB40 competition provides Lancashire with their best hope of winning a trophy.

Spinner Parry took 4-21 as the Red Rose moved up to second in their group with a rain-affected seven-wicket win over Middlesex at Old Trafford on Monday.

"We're pretty focused on it," Parry told BBC Radio Lancashire. "The T20 has gone so this is probably our clearest route to winning something."

Lancashire have three games in hand on the Netherlands, who top the group.

The three group winners, plus the best of the three runners-up, will qualify for the semi-finals on 1 September, with the final taking place at Lord's two weeks later.

"You don't really look at being runners-up," added Parry. "If you do that, you've got the chance of not qualifying.

"It will be nice to win the group well and get a semi-final at home.

"We've got to play Gloucestershire twice and the Netherlands as well, so we've got some big games coming up and if we can come out on top of those, I think we will top the group."

The reigning county champions have struggled in the four-day format this season, winning just one of their 10 Championship matches, and went out of the FL t20 in the group stages.