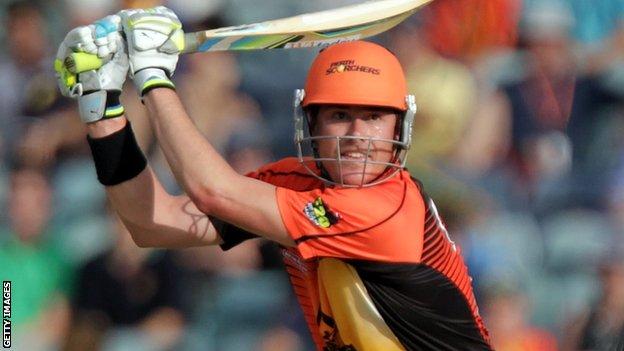 In match heavily affected by rain, Northants declared on 350-5, with David Sales unbeaten on 138.

Both teams forfeited an innings, giving Glamorgan a winning target of 351 from 90 overs.

North hit 73 before Allenby and Wallace combined to ensure victory.

The sixth-wicket pair put on 114, with Allenby striking an unbeaten 67 and Wallace 54 as the visitors made their target with five balls of the match to spare.

Glamorgan's chase got off to an awful start as they lost Will Bragg, caught behind off Chaminda Vaas to the second ball of the innings.

Stewart Walters then plundered 29 but he perished when he dragged Northants captain Andrew Hall's delivery onto his stumps.

Glamorgan reached lunch on 70-2, still needing 281 to win, but Gareth Rees walked after making 34 when Stephen Peters took a brilliant one-handed catch at silly mid-off off the bowling of Middlebrook.

This preceded a stalemate with Northants' striving for further wickets and neither North nor Ben Wright looking to play any big shots.

North was able to eventually kick on, however, as he completed a composed half-century off 99 balls, but Wright was dismissed on 34 when he nudged David Willey behind in the third over after tea.

And North followed in Willey's next over when the paceman took out his middle and off stumps but the new pairing of Allenby and Wallace swung the contest Glamorgan's way.

With the match heading towards a thrilling climax, Allenby completed a terrific half-century off just 68 deliveries while Wallace quickly following suit off 67 balls.

Glamorgan needed 50 from the last 10 overs, but Wallace holed out when he smashed Kyle Coetzer to Rob Newton at extra cover.

James Harris (6) was then run out by Alex Wakely from backward point, but the winning runs came when Allenby scrambled two off Hall with the first ball of the final over.