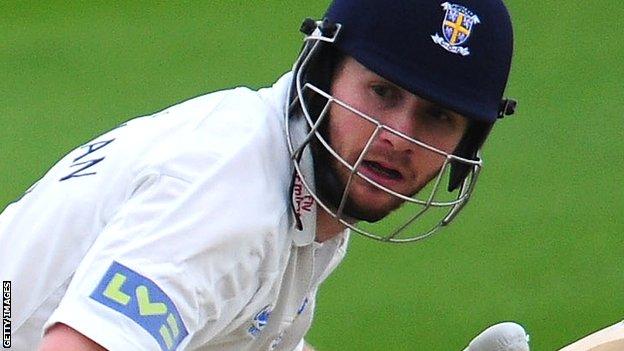 Durham's Mark Stoneman scored a half-century but Sussex had the better of a rain-hit opening day at Arundel.

The visitors slumped to 1-2 and 34-3 as James Anyon (2-20) got rid of Will Smith and Gordon Muchall, while Steve Magoffin accounted for Ben Stokes (20).

But Stoneman hit an 82-ball 50 before being trapped lbw playing across the line to Monty Panesar.

This could be a compelling battle over the next three days

Rain halted play 15 minutes before lunch with Durham on 92-4 and play was called off shortly after 16:00 BST.

Michael Yardy's decision to put the visitors into bat paid dividends as early as the third over.

The Sussex skipper took a great diving catch at second slip to dismiss Smith for one and Muchall followed for a golden duck, losing his off stump as Anyon took two wickets in two balls.

Stokes, who has been named in hit four fours before becoming Yardy's second catch of the morning, in front of his face - this time off the bowling of Magoffin.

Stoneman and Dale Benkenstein pushed Durham past 50 but, two balls after reaching his half-century, Stoneman fell lbw to Panesar.

Durham's recovered from a broken hand to skipper his side and was unbeaten on four at close, with Benkenstein 11 not out.

"Yet another frustrating day for Sussex. Having lost two full days at Edgbaston last week, only 27 overs were possible before more rain arrived on the South coast.

"Mike Yardy's decision to bowl having won the toss was fully justified and, without a fine innings from Mark Stoneman albeit ending in a sloppy dismissal playing across the line, Durham could have been in desperate trouble.

"The forecast for the rest of the match looks slightly better. With both sides keen to press for a result - Sussex to keep the pressure on the sides at the top and Durham in their fight to avoid relegation - this could be a compelling battle over the next three days."