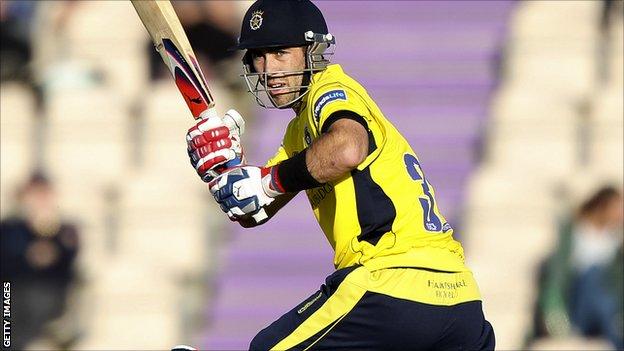 Hampshire batsman Glenn Maxwell has paid tribute to the county's management after earning his maiden call-up to Australia's limited-overs squad.

Maxwell, 23, has been named in the one-day and T20 squads to take on Pakistan in the United Arab Emirates next month.

He told BBC Radio Solent: "I didn't really expect it to happen any time soon. I'm very proud at the moment.

It probably wouldn't have happened if I hadn't come to Hampshire. They've really helped me out and hopefully I can repay the faith

"I feel I owe Hampshire a lot, there were a few issues when I arrived and they sorted it all out for me."

The right-hander added: "I was surprised they [Australian selectors] looked at my form here, I didn't think they looked at County cricket that much so I'm very surprised and glad they have. It means my season here hasn't gone unrewarded."

The call-up comes off the back of a strong domestic season for state side Victoria and Big Bash League outfit the Melbourne Renegades.

He also hit the fastest domestic one-day half-century when he smashed 50 off 19 balls against Tasmania in February 2011, and said he hoped to impress as Hampshire aim to qualify for the FL t20 finals day.

"They've really helped me out and hopefully I can repay their faith in the last quarter-final game," he said. "It probably wouldn't have happened if I hadn't come to Hampshire.

"It's been a bit of a whirlwind with lots of calls from home from family and friends but it's been great," he added.