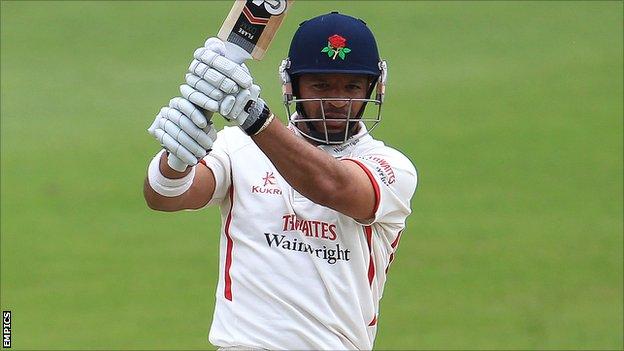 Ashwell Prince believes Lancashire are starting to show signs of their best form in the four-day game.

The reigning county champions failed to win any of their first seven matches and have won only one Championship match during the 2012 season.

South Africa international Prince told BBC Radio Lancashire: "I think we're playing some good cricket, even though results might not show that.

"We're getting better and hopefully that trend will continue."

Prince continued: "It's been unfortunate that most of our games have been affected by rain.

"As much as we've tried in some of the other games to force a result, we haven't been able to do that."

Lancashire, who are sixth in Division One, were again thwarted by the weather in their latest Championship match against Surrey.

Paul Horton and Steven Croft both scored centuries in Lancashire's first-innings total of 425-7 declared, but an unbeaten double-century from Kevin Pietersen and a day of rain at Guildford denied them a chance of victory.

Despite having to settle for a sixth draw in 10 four-day games this season, Prince said the batting line-up can take positives from their performance.

"Surrey have got some decent bowlers in their line-up like Chris Tremlett and Stuart Meaker, so for the boys to get a couple of hundreds was a good effort," said Prince, who has not been included in South Africa's Test squad for the upcoming series against England.