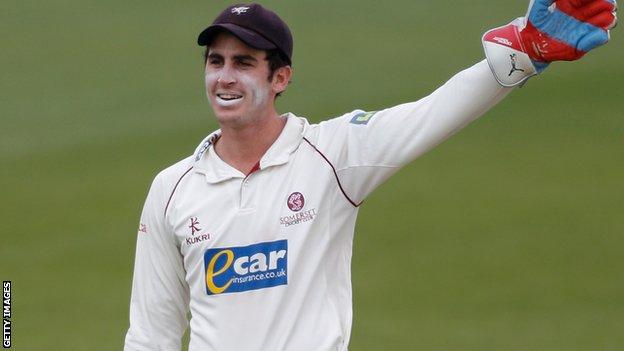 Somerset wicketkeeper Craig Kieswetter has played down his bowling credentials after taking his first one-day wicket in the CB40 victory over Scotland.

After hitting 56 with the bat, the 24-year-old handed over the gloves to Jos Buttler to become a third spin option.

He took the wicket of Craig Wallace to finish with 1-19 from his two overs.

"It wasn't a genuine wicket ball, he chipped one down to mid-off and [Peter] Trego nearly dropped it, but I'll take that," Kieswetter told BBC Somerset.

"I just lobbed a few down today and got dispatched for a few, but I managed to take a wicket so that was great."

He added: "I take my bowling seriously. A single went to short third-man that could have been avoided and I lost my rag because it was a run against my name."

Kieswetter hit eight fours and a six to help Somerset to 206 all out and then came on to bowl in the 28th over, with Scotland 113-7.

By that point, Craig Meschede had already done the damage - ending with figures of 4-27 - and the visitors were bowled out for 146 with more than eight overs to spare to earn the Taunton outfit their first win in the competition.

Kieswetter had previously impressed with the ball by taking two wickets in the County Championship match at Worcestershire last month - his first bowling spell in first-class cricket.

But he insists: "I've always been a wicketkeeper and I haven't done much bowling even in junior cricket.

"Conditions suited spin and we felt we might need a couple more overs of it, so the game plan at halfway was for me to bowl.