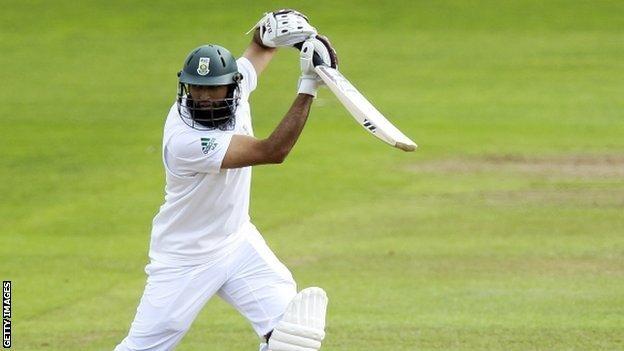 South Africa's main batsmen managed to get some time at the crease against Kent in their final warm-up match before the first Test against England.

In a rain-interrupted match which ended in a draw, the tourists started day three on 108-2 and reached 314 all out.

Hashim Amla (77) and Jacques Kallis (54) both retired out to allow their team-mates to get in some practice.

Jacques Rudolph also made 50, although South Africa's bowlers failed to take a wicket as Kent closed on 105-0.

"I think it was good preparation, specifically from a batting point of view - everybody got starts, got in," said Rudolph.

"It was a little difficult for the bowlers. The wicket didn't really give them any assistance.

"But the way we've batted here as a unit was exceptional.

"We're pleased with the work we've done, and I can promise you all the boys just want that first Test to start now."

Kent openers Sam Northeast (54no) and Daniel Bell-Drummond (48no) negotiated 32 overs without loss.

They saw off the new ball attack of Morne Morkel and Vernon Philander, with Dale Steyn, Kallis and spinner Imran Tahir also unable to break the partnership.

The first Test against England starts at The Oval next Thursday.