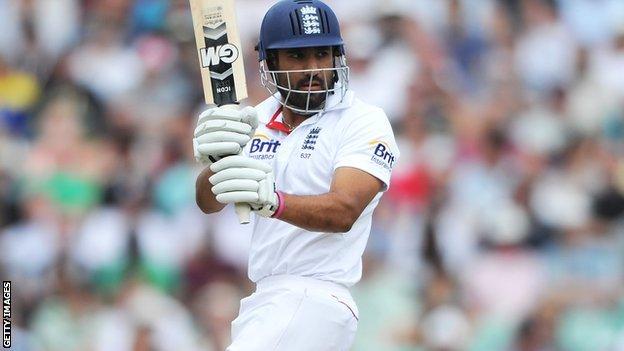 Ravi Bopara has been recalled to the England squad to face South Africa in the first Test at The Oval.

The Essex batsman, 27, is set to play his first Test for almost a year and comes into the side in place of Yorkshire's Jonny Bairstow.

"It's a well-deserved chance for Ravi Bopara but it's one he'll have to take because there are batsmen queuing up for selection. Ravi has experience and he had a great run against West Indies which made people get very excited, but those figures were deceptive. He's worked hard at his game and is trying to be more focused at the start of his innings, which looks to be paying dividends. When he's at his best he's a beautiful player.

As for Jonny Bairstow, he's the next generation and his time will come. There is still the possibility he will go on tour with England in the winter."

"Ravi has shown us he is a talented cricketer... so he justifies his inclusion," England selector Geoff Miller told BBC Radio 5 live.

"Jonny has had a bit of a tough time. We know he is young and talented cricketer so he just needs to go back to Yorkshire and score some big runs and fight for his place again."

Miller said Bopara's selection had come on the back of impressive performances in the one-day series against West Indies and Australia and he hoped he could take that onto the Test stage.

"We'd like to see something big from him but he's only part of a side, so he needs to actually perform to cement his place."

If Bopara makes the starting team, it will be his 13th Test cap and his first since he played in an innings victory over India at The Oval last August.

Following Eoin Morgan's loss of form last winter, Bopara seemed certain to return at the start of this summer - only to injure his thigh playing for his county the day before the squad was announced for the first Test against the West Indies at Lord's.

Bairstow was therefore chosen to make his debut, but the youngster managed just 38 runs in three innings.

Elsewhere, concerns about sore elbows for bowlers Swann and Bresnan proved unfounded as they were included in the squad.

And England have kept their options by including Steven Finn and Graham Onions, who were both involved in the most recent Test, a rain-ravaged draw against West Indies at Edgbaston last month for which James Anderson and Stuart Broad were rested.

With those two first-choice fast bowlers back, the only decision remaining for coach Andy Flower and captain Andrew Strauss - given England's long-held policy of a four-man attack - is to pick between Bresnan, Finn and Onions to complete the team.