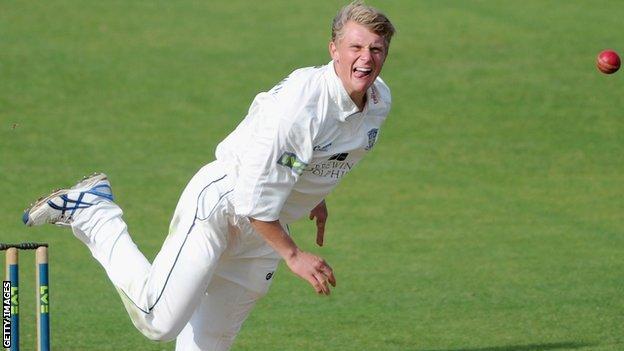 Worcestershire's hopes of claiming their first County Championship victory of the season were dashed as they collapsed on day three against Durham.

The hosts were well placed when they resumed on 100-2 but lost eight wickets for 105 runs and were all out for 205.

Phil Hughes, 52 overnight, fell 13 runs short of a century when he became one of Scott Borthwick's four wickets.

Durham lead by 105 runs with 10 second-innings wickets and one day remaining, but the rain played a part for the third day running as play was ended early.

A total of 119 overs have been lost to the wet weather as Durham, also searching for their first victory of the campaign, look set to be frustrated.

Borthwick (4-37) was the pick of the bowlers for the visitors with Chris Rushworth also contributing with 3-43 as Worcestershire lost wickets at regular intervals.

Australian Hughes, who scored more runs in the FL t20 competition than any other player, was dismissed for 87, trapped lbw by Borthwick.

"Worcestershire will be bitterly disappointed to have collapsed from 145-2 to 205 all out and, apart from Phil Hughes who played very well in making 87, they fell away.

"Scott Borthwick will take the bowling honours for Durham with his four wickets but he was supported by Chris Rushworth, Ben Stokes and Callum Thorp as the visitors bowled very well as a unit.

"With a lead of 38 on first innings' scores, Durham's openers seldom looked troubled in reaching 67 without loss to extend their overall lead to 105 when the rain forced the players off one over before tea.

"With more rain forecast, the draw looks the only possible outcome unless the captains get together and come to an agreement to set up a match. However, given the teams' league positions, this is unlikely."