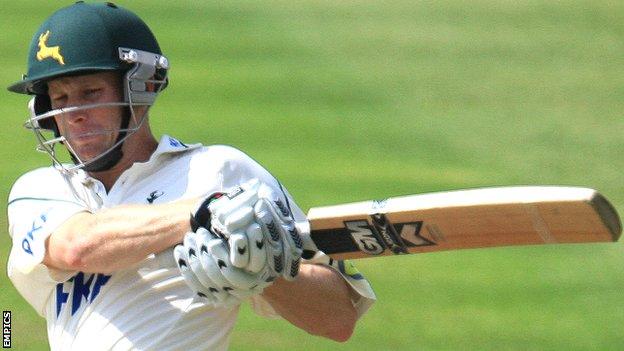 He was supported by Chris Read (71) as the pair put on 143 for the sixth wicket, while Michael Lumb made 50.

Toby Roland-Jones (4-102) took the last wicket to fall, before rain brought an early end to the day's play.

But not before Andre Adams played his usual little camero with the bat. He hit his first ball for six, his second for four, was dropped off his third and played on heaving at his fourth.

"Nottinghamshire continued their disciplined display with the bat on the second day as they assumed control of the match.

"Middlesex were guilty of numerous dropped chances throughout the innings and will reflect that they could have kept the first-innings deficit a lot lower had they fielded better.

"The bowlers stuck admirably to their task and both Roland-Jones and Tim Murtagh richly deserved their hauls, while Gareth Berg bowled a number of tight spells throughout the innings to maintain some control of the Nottinghamshire scoring rate.

"A monumental task lies ahead of the hosts in their attempt to save the game, but the weather may well aid them on the final two days just as it did on the second evening."

"Adam Voges will always be remembered for his ton at Old Trafford which helped clinch the Championship in 2010, but his innings here was equally effective in bowler-friendly conditions.

"Helped by another half-century from the impressive Michael Lumb and a typically-punchy 71 from Chris Read, the Australian has put his side in a position of some strength at the half-way point.

"Bad weather is forecast for the next couple of days but it will be a travesty if Notts' fine work so far isn't rewarded with a win."