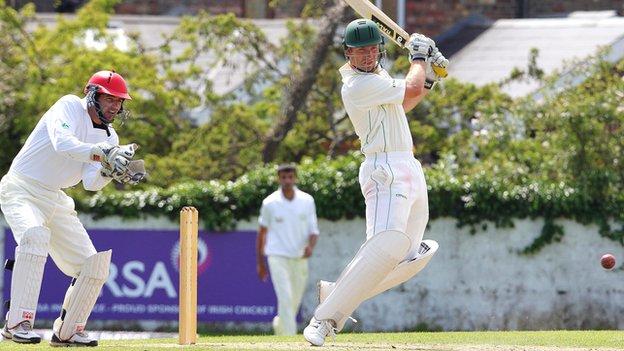 Afghanistan held on to secure a draw with Ireland on the final day of the Intercontinental Cup clash in Dublin.

An opening partnership of 106 between Karim Sadiq (46) and Javed Ahmadi (59) helped the tourists reach 208-7 when the game ended.

Ireland earn 13 points from the match while Afghanistan get seven.

The Irish were in a hurry on Wednesday after two days lost to rain, and they skittled the tourists out in 29.1 overs.

Max Sorensen and Alex Cusack both took four wickets while Trent Johnson claimed the other two.

The tourists struggled with the bat and their top score was just 13, reached by Afsar Zazai, Samiullah Shinwari and Gulbadin Naib.

Paul Stirling hit 42 as Ireland replied strongly and they finished the day on 126-2, a lead of 42.

Afghanistan are the cup holders while Ireland won the ICC competition for the three years prior to that.