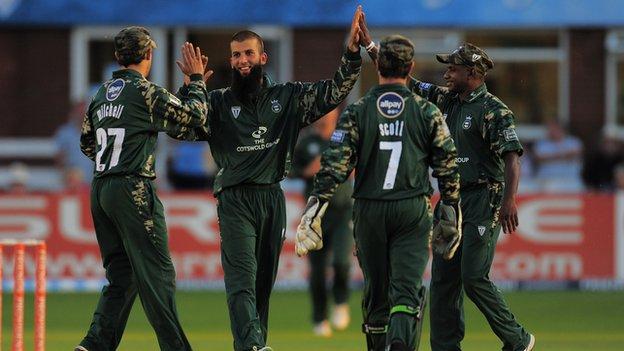 Worcestershire coach Steve Rhodes is in no doubt that his men have earned their place in the last eight of the FL t20 after qualifying for the quarter-finals for only the third time in 10 years.

Rhodes' little-fancied side were shorn of any overseas signing, after being let down first by Saeed Ajmal, then his Pakistan team-mate Sohail Tanvir.

But Rhodes told BBC Hereford & Worcester: "We throughly deserved it.

"We're one game away from finals day and now anything can happen," he added.

"We planned on having two overseas players and that didn't happen.

"But we had one goal for the Twenty20 and that was to qualify for the quarters and we've done that."

Sunday's home defeat by Somerset, just a week after outplaying the three-time beaten finalists at Taunton, cost Rhodes' men top spot in the group - and a home quarter-final.

But, five years on from his team's last appearance in the last eight, Rhodes is delighted with their progress in this year's competition.

Worcestershire in the T20

And, when his team head for Headingley to play his native Yorkshire on Wednesday, he is insistent that Worcestershire are capable of upsetting the North Group winners.

"If we can pull in a performance like we did at Taunton, then we'll go close," he said.

"Somerset are the Twenty20 kings in this country, if you like.

"They invest a lot in it trying for the Champions League and put a lot of eggs in the basket in making sure they get there.

"But, although I was disappointed to lose to them up here, we gave them a good thumping down there at Taunton.

"We went into the final game top of the group. And that's testament to the cricket we've played. We're mixing it with the best.

"We're not blessed with 20 world-class players.

"We've got good spirit, we stay very much together even when things don't always go our way and we try to send some of these more wealthy clubs away with their tails between their legs."

Before that quarter-final comes round, Worcestershire have the resumption of County Championship cricket to contend with when Durham visit New Road on Tuesday in the battle of the bottom two.

Pacemen Alan Richardson and Richard Jones will come back in after sitting out the Twenty20 campaign.

"They've had a good opportunity to recharge their batteries as the others who came in did so well," said Rhodes.

"David Lucas had a good campaign, Gareth Andrew speaks for himself the way he can hit the ball. We have to pick him. And Jack Shantry has been our best Twenty20 bowler over the last two years.

"But both Alan and Richard have done well in Championship cricket and they'll be fresh.

"And we've all got to get our heads round four-day cricket again as there's a lot to play for over the last nine games."