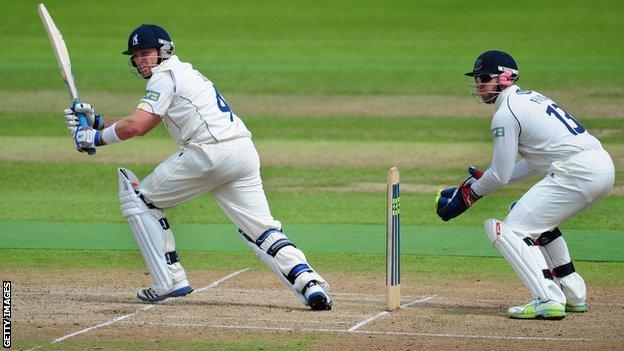 England batsman Ian Bell warmed up for next week's first Test against South Africa with a half-century for Warwickshire on day one against Sussex.

Bell top scored for the Bears with 57 after Warwickshire had won the toss and decided to bat first at Edgbaston.

William Porterfield (43), Jim Troughton (42 not out) and Varun Chopra (26) all made useful contributions as the hosts reached 175-3 before the rain came.

Monty Panesar took two wickets for Sussex but only 65 overs were possible.

Bell, the player of the series during England's recent one-day matches against Australia, was playing his first game for Warwickshire since early May.

He hit 10 boundaries in his innings before he was caught by Chris Nash at mid-wicket off Steve Magoffin's bowling.

Warwickshire openers Chopra and Porterfield made slow progress before both fell lbw to Panesar.

Bell and Troughton added 80 for the third wicket, although Bell was dismissed shortly before rain ended the play early.

"This wasn't a day of thrills and spills and it certainly wasn't T20. But the Warwickshire faithful who turned up at Edgbaston were just pleased to see some cricket.

"So there were few murmurs of complaint while the watchful Bears scored at less than two an over in the morning session, although Ian Bell did provide some entertainment later.

"The England batsman played some majestic strokes before his innings was cut short when he smacked a half volley straight to mid-wicket.

"By the end of the day it all seemed like a dream as the familiar sight of the covers on and rain coming down returned."