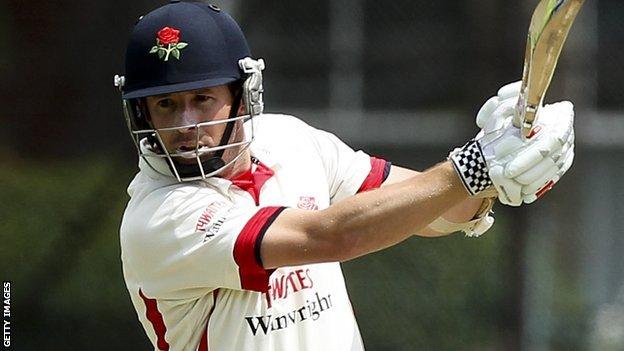 Paul Horton hit a century as Lancashire built a sizeable total on the first day of their clash with Surrey.

Horton scored 110 for his second County Championship ton of the campaign as Lancashire ended day one on 245-3.

Karl Brown added 49, Ashwell Prince will resume on 32 not out on Thursday, while Stephen Moore also scored 24.

We need to battle hard and move up the table

Stuart Meaker (2-55) took two wickets for Surrey, who included Kevin Pietersen in their Championship team for only the second time this season.

Lancashire, the 2011 champions, were aiming for only their second four-day win in 2012 but lost their first wicket with only 47 on the board when Moore was trapped lbw by Meaker.

However, Horton and Brown put on 122 for the second wicket before Brown was caught behind by Steve Davies.

Horton guided Lancashire to their first batting point but was dismissed late in the day, caught by stand-in captain Gareth Batty off Chris Tremlett's bowling.

Tremlett was making his first County Championship appearance of the year after undergoing back surgery following an injury sustained during England's first Test against Pakistan in January.

"I'm disappointed to not carry my bat but I would've taken a hundred at the start of the day.

"It has been a tricky opening nine games so to get in and get some runs is nice.

"It's nice to get a couple of centuries but the key is we need to battle hard and move up the table. My job is to see off the new ball and get as many runs as I can.

"We lost the toss and were put in to bat but we are very happy with where we are."

"An excellent day for the County Champions having lost the toss and being asked to bat by Surrey skipper Gareth Batty.

"With the wicket having been covered for the last few days, Batty's decision looked entirely sensible, but the Lancashire batsman, particularly Paul Horton, showed there were few demons in the pitch.

"Horton's innings was a mixture of careful defence and, when the chance arose, sensible attack. His cover driving in particular was a joy to watch.

"Lancashire will be delighted with their day's work and will expect to build on this excellent foundation and post a sizeable first-innings total tomorrow."