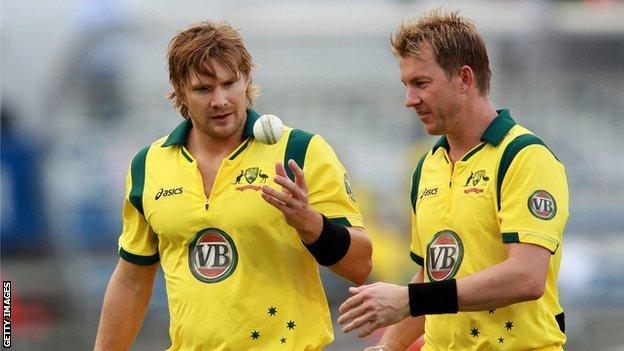 Australian duo Shane Watson and Brett Lee will miss the fifth and final one-day international against England after returning home because of injury.

Vice-captain Watson and fast bowler Lee each picked up calf problems as the Aussies went 3-0 down in the fourth ODI against England last Saturday.

Both players will have "further treatment" and are doubts for the limited-overs series against Pakistan.

Bowler Mitchell Starc has cut his stint short at Yorkshire to come in as cover.

Australia team Dr John Orchard said: "Shane Watson and Brett Lee have calf strains - Shane to the left and Brett to the right calf - sustained during the fourth ODI against England at Durham.

"This is the opposite calf to the injury Shane had last summer. Because both players will miss the final game, they are flying back to Sydney for MRI scans and further treatment.

Meanwhile, England batsman Jonny Bairstow has been released from the squad for the fifth ODI against Australia at Old Trafford on Tuesday and will be available for Yorkshire's LV County Championship Division Two match against Hampshire, starting on Wednesday.