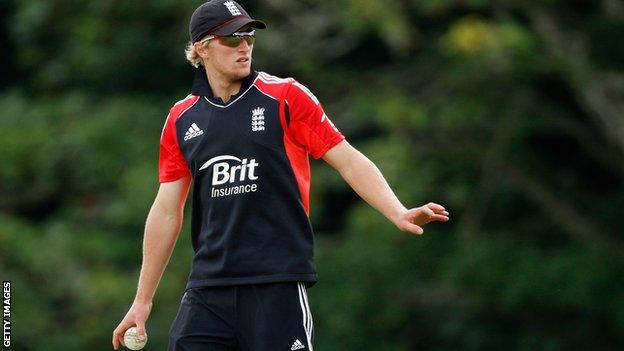 Kent's Adam Ball says it is a privilege to be captaining the England Under-19 team to the World Cup in Australia.

"It's a great honour," the 19-year-old seamer told BBC Radio Kent. "To cement my place as captain shows the ECB [England & Wales Cricket Board] believe I'm the right man to do the job.

"I'm very excited to get away with the boys. I feel we've got a very talented squad and we'll hope to go well."

Ball will lead a 15-man squad to the tournament which begins on 11 August.

He will be accompanied by Kent teammate Daniel Bell-Drummond, England's most prolific one-day batsman ever at that age group.

The 18-year-old opener from Lewisham has found opportunities at the St. Lawrence Ground limited in 2012 thanks to Scott Newman's loan and the emergence of Sam Billings.

But Ball said regardless of his county prospects, Bell-Drummond was an invaluable member of the national side.

"DBD has been working hard in the second team and he's scored quite a few runs," he said.

"He is quite disappointed he hasn't got a run in the first team and speaking to fans, they're quite upset he hasn't.

"He's a very talented player and on his day can play some serious shots."

Ball added: "In terms of the Under-19s, he's a massive part of our team. He's got us off to some unbelievable starts."

The Under-19 World Cup means the Kent duo will miss all but the final couple of weeks of the domestic season.

Kent captain Rob Key, who was part of the last England team to win the tournament in 1998 alongside the likes of Owais Shah and Graeme Swann, believes the experience will benefit the youngsters in the long term.

"That programme they're on has enhanced their games a hell of a lot," he said.

"A year is a very short time in a 19-year-old's career and the experience they get out there will be very beneficial to them.

"In the next three or four years, they'll all be coming towards a time that'll be exciting for Kent cricket."