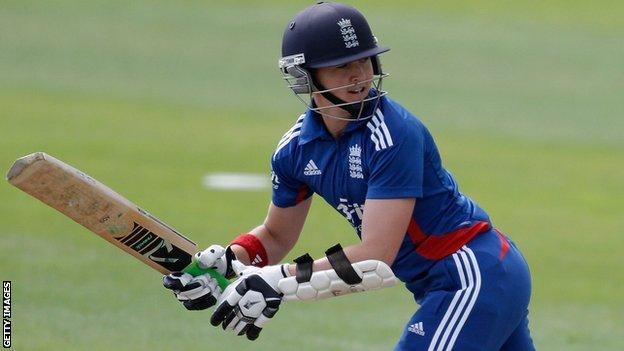 India had and captain Mithali Raj hit 92 not out in their 173-5 as they strove for an unassailable 3-0 lead.

The hosts continued to lose wickets but Arran Brindle (40 not out) saw them home with 16 balls to spare.

India lead the five-match series 2-1, with England needing to win the last two games, at Truro on Sunday, and at Wormsley on Wednesday, to clinch the series.

Seamer Georgia Elwiss was again economical with the new ball, conceding only 15 runs from her 10 overs, while spinner Danni Wyatt picked up two Indian wickets.

Raj again dominated her side's innings, with none of her team-mates reaching 25.

By contrast, Edwards's wretched run of form against India continued - having scored one, 15, one, nought and seven in the two Twenty20 internationals and three one-day internationals so far on the tour.

The England captain was also trapped lbw by right-arm seamer Nagarajan Niranjana for the fourth time in those five innings.

But her opening partner Beaumont added 58 with Taylor and 35 with the fit-again Lydia Greenway (20) before the experienced Brindle, who hit five fours, steered the hosts to victory.

The next one-day international is at Truro on Sunday, with full commentary on BBC Radio Cornwall.