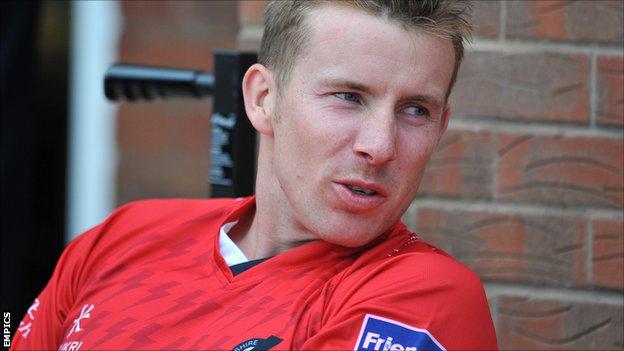 Steven Croft has blamed the weather for Lancashire's eight-wicket defeat to Nottinghamshire in the FL t20.

The Red Rose set Notts 179 to win, but rain at Trent Bridge left the hosts chasing a revised target of 42 from four overs, which they reached easily.

Croft, who captained the side in the absence of Glen Chapple, told BBC Radio Lancashire: "We batted first and I thought we had a match-winning total.

"The weather spoiled it. A 20-over game would have been a good contest."

He continued: "The D/L (Duckworth-Lewis) brought them back into it a little bit. They had two overs of powerplay out of five, which I thought was a bit generous.

"They came out and batted well. We just thought it evened the game up a little bit. I think we would have had a good crack at defending that 178 if it had been a full game."

A county-record opening stand of 114 between Stephen Moore (80) and Tom Smith (56) helped Lancashire to 178-4 from their 20 overs, their second-highest total in the competition so far this year.

Notts had reached 7-0 after one over when the rain came, and knocked off the remaining 42 runs they required with two balls to spare.

Lancashire are fourth in the North Group and need to win their final two matches, against Yorkshire and Durham, to retain any hope of