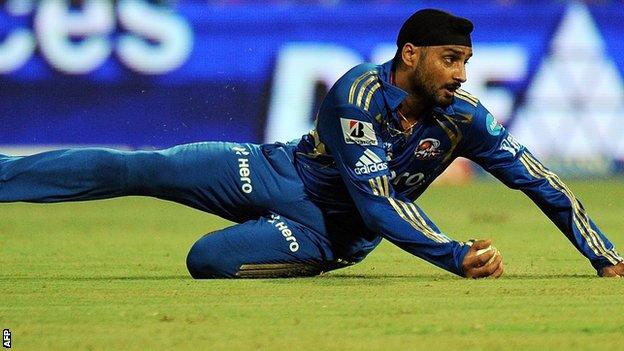 Essex have signed India spin bowler Harbhajan Singh for the second half of the county season.

Harbhajan, 31 on Tuesday, has taken 683 wickets in all forms of international cricket but has not played for India since last summer's tour to England.

He is set to make his debut in the Championship game with Gloucestershire at Cheltenham, starting on 11 July.

"Harbhajan is a great character and a match-winner," head coach Paul Grayson told the Essex website.

"I believe that his winning mentality will rub off on the rest of the playing squad."

The off-spinner is set to play eight Championship fixtures and the team's seven remaining CB40 matches.

And new team-mate Ravi Bopara was quick to tweet a message, saying: "Happy bday @harbhajan_singh & welcome to Essex eagles. I'm sure u will enjoy your time here & take lots of wickets."

He has previous experience of county cricket, having played for Surrey in 2004 and 2007.

Essex will be hoping he has a major impact after having little luck with their overseas signings so far this season.

Australia seamer Peter Siddle was set to join the Chelmsford club until injury ruled him out, while a deal fell through for Bangladesh all-rounder Shakib Al Hasan.

South Africa batsman Alviro Petersen struggled to make an impact during his short stint at the club, averaging just 21.36 from seven matches.

"We said at the beginning of the year that we were serious about wanting to get back into Division One," he said.

"Hopefully this move [signing Harbhajan] will convey that message more robustly. We are very focused on trying to do everything we can to get into Division One for next year."