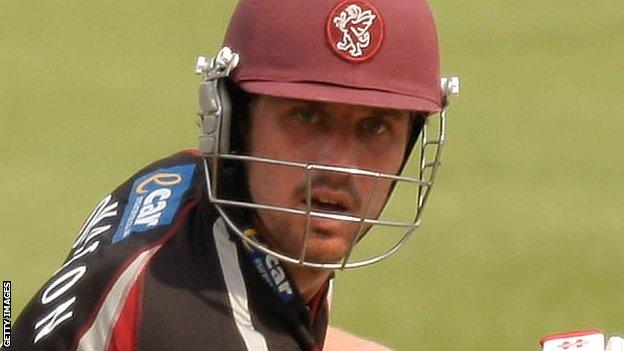 Nick Compton's unbeaten 42 helped Somerset to a seven-wicket win over Worcestershire and a home FL t20 quarter-final with Essex.

But the hosts also go through as a best third-placed team and will now travel to North Group winners Yorkshire.

Worcestershire were restricted to 119-7 with Phillip Hughes scoring an unbeaten 45, Albie Morkel taking 3-30.

Somerset reached 120-3 with seven balls to spare as Compton was backed up by James Hildreth (35 not out).

Both Worcestershire in the Midlands Group and Essex in the South Group finished third on 11 points and go through at the expense of Durham who finished on 10 points in the North Group.

"With the cricket we've played over the last three or four years, we breezed in to quarter-finals and semi-finals.

"But we've done it the hardest way. We started well but faltered, before coming back to play a very professional game.

"I think if Worcestershire had got another 20 or 30 it would have been a different story.

"But we've learnt our lesson from one or two innings we've had in previous games and I thought we did very well."