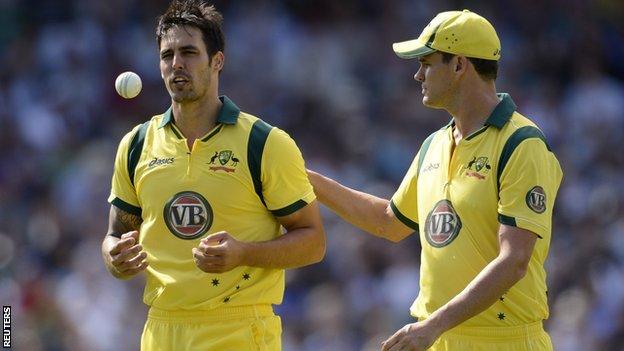 The second one-day international at The Oval offered the chance to size up two bowlers hoping to force their way into Australia's plans for next year's Ashes in England.

Left-arm quick Mitchell Johnson, a veteran of Australia's bruising defeats in the last two series, and right-arm seamer Clint McKay, set out to prove their credentials in English conditions - with mixed results.

The story so far

A proven match-winner in all forms of international cricket, Johnson fired Australia to a series-levelling victory in the 2010-11 Ashes in Perth, but fell apart in Melbourne and Sydney as touring England fans mercilessly delighted in his every wayward delivery.

Johnson has never rediscovered his best form and was appearing for Australia for the first time since suffering a toe injury against South Africa in November.

McKay was given his Test debut in 2009 but managed only one wicket against the West Indies in Perth and has not been picked since. A 6ft 4in medium-fast bowler with excellent control, he has become a fixture in the one-day side, averaging an impressive 22.61 in 30 matches.

How did they get on?

The Oval crowd wasted no time in getting on Johnson's case on Sunday and were cock-a-hoop when he sent down two no-balls in his first two overs, with the resultant free-hits ruthlessly dispatched to the boundary by Alastair Cook and Ian Bell.

Although two more no-balls and two leg-side wides followed in his second spell, there were also one or two truly unplayable deliveries, offering hope for Australia fans that an action remodelled under the tutelage of Australia fast-bowling great Dennis Lillee may just bear fruit.

Johnson's return saw McKay demoted to first-change but he immediately showed his quality by removing Cook with a delivery that swung in to the left-hander and trapped him on the knee-roll in front of middle stump. Moving the ball both ways, McKay beat the bat several times in giving up only 12 runs in his opening four-over spell.

With the game slipping away from Australia later in the match, McKay tried to vary his pace and bowled with wicketkeeper Matthew Wade standing up to the stumps. Although he wasn't spared the odd clobbering by Ravi Bopara and Eoin Morgan as England surged to victory, he was Australia's most economical bowler for the second match in a row.

"Johnson is obviously feeling his way back a bit after some work on his action and his arm did look a bit higher which will help him bowl straighter.

"I just worry that England are in his head a bit and he is letting the crowd get to him. You only have to look at what happened in 2005 when Michael Kasprowicz and Jason Gillespie were finished by the crowds to see the danger of picking him next year. He will have to be in really good wicket-taking form to warrant selection.

"McKay looks a decent bowler, but it did worry me a touch from an Australia point of view that the keeper was standing up to him, suggesting he is not hitting the bat very hard. He does look an English-type bowler, who swings the ball a bit, is quite tall and can bowl a lot of overs. I don't think he's someone who is going to rush through a batting line-up but he could do a fourth seamer's job and you could imagine him and Ben Hilfenhaus competing for a slot on the tour."

"Johnson's action has improved since the last time we saw him. His front arm is coming straight down the wicket, he looks a lot more compact and his action is a lot more repeatable. It's going to be hard for him, with the crowd getting stuck in to him, but all is not lost.

"The only doubt over McKay is probably his lack of pace but he has learnt to use his variations and has a good slower ball. He is a good hard competitor and English conditions suit him beautifully because he can hold up an end and is a great exponent of seam and swing too. He has to be pushing Peter Siddle for a place in the Ashes squad for next year."

"Johnson is a fantastic talent. His record is incredible in one-dayers and he is a match-winner but he has to cope with the psychological factor every time he plays England because they are going to give him plenty.

"His technique looks better and he is going to be a big threat in the Ashes if he gets his new action to be consistent. If I was the Aussies, I'd be backing this horse."