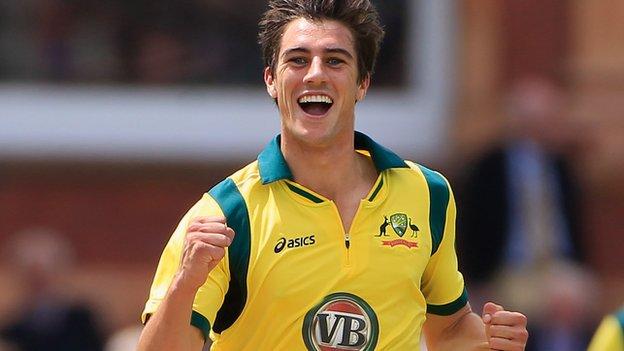 Australia fast bowler Pat Cummins has been ruled out of the remainder of their one-day series against England because of a side strain.

Cummins, 19, picked up the injury during Australia's 15-run defeat by England in the opening match at Lord's on Friday.

He was replaced by left-armer Mitchell Johnson for Sunday's second match at The Oval.

The tourists will not call up another bowler to take Cummins's place.

Australia team doctor John Orchard said: "Pat sustained an abdominal muscle strain on his left side during the first one-day international at Lord's.

"Whilst he was able to complete his 10 overs, he was sore after the game and was scanned, the results of which have revealed a medium grade side-strain.

"This will keep him out of the remainder of the England tour. His return to cricket will be decided in due course, based on follow-up examinations in Australia."

Cummins shot to prominence in November, claiming a six-wicket haul on his Test debut at the Wanderers to help Australia square the series against South Africa.

Identified as a future leader of the Baggy Green attack, he became the youngest player to be centrally contracted by Cricket Australia last year.

Before the series in England, Australia coach Mickey Arthur talked up Cummins, stating: "The player I am most excited about is Pat Cummins. He has the ability to become one of the best in the world."

Cummins showed glimpses of his potential at Lord's, bowling several deliveries in excess of 90mph.

He had England captain Alastair Cook caught behind with a ball angled across the left-hander and hit Ravi Bopara on the back of the head with a fierce bouncer.