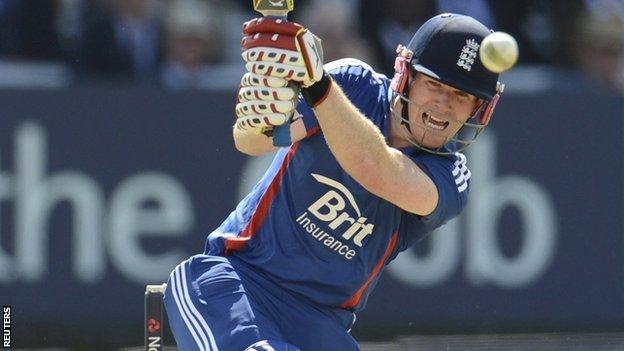 Eoin Morgan hit a blistering unbeaten 89 off 63 balls as England beat Australia by 15 runs to take a 1-0 lead in the five-match one-day series.

The left-hander timed his assault to perfection on his home ground, blasting four sixes as England took 72 runs off the last seven overs to lift their total to 272-5.

A muscular half-century from opener David Warner kept Australia in the hunt, but a flurry of wickets in the middle overs checked their momentum.

Captain Michael Clarke did his utmost to haul his side back into the match, but when he was trapped lbw by Tim Bresnan for 61 the game was effectively over and England comfortably held on to seal their seventh one-day win in a row.

There were two wickets apiece for England's quartet of seamers, who to a man bowled with relentless accuracy and discipline on a surface that offered just enough assistance throughout.

Their efforts would have been in vain, however, without Morgan's brilliant late salvo.

The Dubliner, dropped from the Test side after a miserable series against Pakistan earlier this year, delivered a reminder of what a devastating limited-overs player he can be.

He struck five fours and four huge sixes as he and Craig Kieswetter tore into the Australia attack to transform an ordinary total into an imposing one.

A score in excees of 270 looked a long shot when England were put in to bat under dark clouds and a chilly breeze blowing across the famous old venue.

The teams were forced off three times in the first six overs by squally showers but, once they settled, Ian Bell and Alastair Cook batted with purpose to put on 74 for the first wicket.

Bell, who batted as fluently as any player in making 41, was pinned in front by Brett Lee and Cook followed soon afterwards for 40 when he nibbled at a ball angled across him, giving 19-year-old paceman Pat Cummins his first international wicket in England.

Ravi Bopara was struck on the head by a brutish bouncer from the hostile Cummins and never looked comfortable thereafter, falling to a routine slip catch by Michael Clarke off Clint McKay.

Jonathan Trott and Morgan steered England through the middle period of the innings with plenty of wickets in hand but, with 10 overs remaining, they were labouring on 189-3.

Morgan served notice of his intent by smashing Cummins over his head for six and, after Trott, working to leg, was surprisingly bowled by Xavier Doherty for 54, the assault began.

In an incredible display of hitting, Morgan struck 26 runs from six deliveries, Lee smashed over long-on for two consecutive sixes before Shane Watson was pulled into the stand at long-leg.

Kieswetter kept up the momentum with a punch down the ground for four and an innovative paddle sweep to the fence before he was caught in the deep off the last ball of the innings.

"The game flowed in England's favour and they have won by a small but significant figure. The crowd saw a special innings and Eoin Morgan moved through the gears like only he can in the England side. He made a match-winning, fours- and sixes-hitting innings."

Australia made a ponderous start to their reply with the big-hitting Warner playing and missing several times at some high-class seam bowling from James Anderson and Steven Finn.

Shane Watson got the scoreboard moving with a straight drive so powerful that it was past bowler Finn before he could flinch. But he was caught behind cutting at his next ball as umpire Aleem Dar's not-out decision was overturned on review.

Warner carried the fight to England with a well-compiled fifty, mixing solid defence with some lusty blows on both sides of the wicket, including a stunning pulled six off Stuart Broad.

Anderson put England back in command with two wickets in two overs as George Bailey chopped on for 29 and Warner was brilliantly caught behind by Kieswetter, diving to his left.

With Graeme Swann offering good control and England's seamers all hitting their straps, there was no let-up for Australia.

David Hussey fell in unfortunate fashion when a Finn bouncer dislodged the bail via his helmet, and Steve Smith was caught behind pushing tentatively at Bresnan.

Clarke and wicketkeeper Matthew Wade breathed life into the contest with a sixth-wicket partnership worth 57, but the skipper's suicidal call left Wade stranded mid-pitch and handed the initiative back to England.

England turned the screw as Bresnan trapped Clarke lbw with a low full toss, before Broad removed McKay and Cummins in quick succession.

Lee did his best to pull off a remarkable win but, thanks to Morgan and England's ever-improving one-day attack, Australia's cause was a hopeless one.

The second game of the series will take place at The Oval on Sunday.