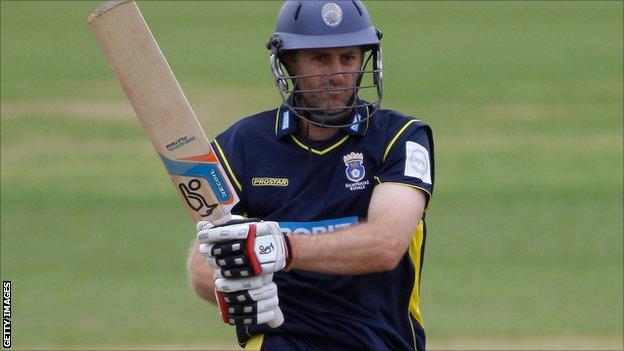 Hampshire batsman Simon Katich has urged the side to build on their back-to-back Friends Life T20 victories against Kent and Middlesex.

The wins have taken Hants up to third in the table and reignited their hopes of making the knockout stages.

Katich hit 40 in what was his first T20 appearance of the season and he was delighted with his performance.

"I was itching to play and it's nice to get the opportunity," Katich told BBC Radio Solent.

The Australian was given the chance because of an injury picked up by Michael Carberry in training and he hopes to be given further opportunity to play limited-overs cricket.

"I've been preparing to play just in case," he added.

"It was nice to get out there and contribute to the win. I'm over here to play cricket and I enjoy hitting with the boys."

Hants are now third behind Sussex and Essex in the table and Katich added: "Momentum is everything in this game.

"If you start stringing some wins together against good teams then you need to keep that roll going."

Hampshire travel to face Essex on Friday, but will again be without oversees all-rounder Shahid Afridi because of ongoing visa problems.