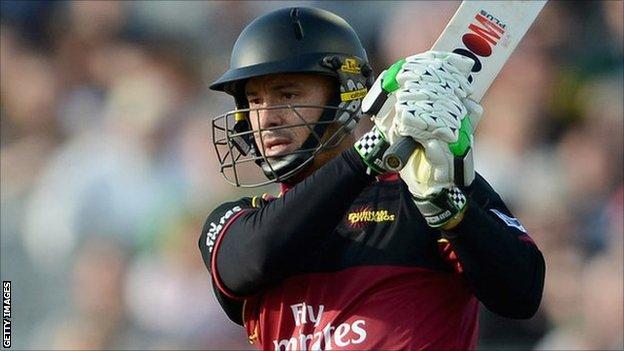 Durham beat Derbyshire for the second time in their FL t20 group, racing to an eight-wicket win at the Riverside.

Garry Park (29 not out) helped Derbyshire recover from a slow start to post 131-7, Chris Rushworth and Scott Borthwick both taking two wickets.

Phil Mustard and Herschelle Gibbs got Durham's reply off to a flying start, reaching 60-0 after seven overs.

Despite Mustard's departure for 35, Gibbs (83 not out) remained to see the hosts home with 17 balls to spare.

Derbyshire have now lost their last four matches, while Durham recovered from back-to-back defeats to move within a point of second-placed Nottinghamshire in the North Group.

"The lads set the tone up front with the ball and after the first couple of balls we felt we were in the game.

"It is always important to start well with the bat or the ball and when you are chasing 120 or 130 to win you feel you should do it.

"It is a good deck and despite the humidity and the rain it played better than we expected so you have to give praise to the bowlers.

"We then got off to a good start with the bat. Me and 'the Colonel' (Phil Mustard) put on 70 and when you do that you know you are in with a shout."