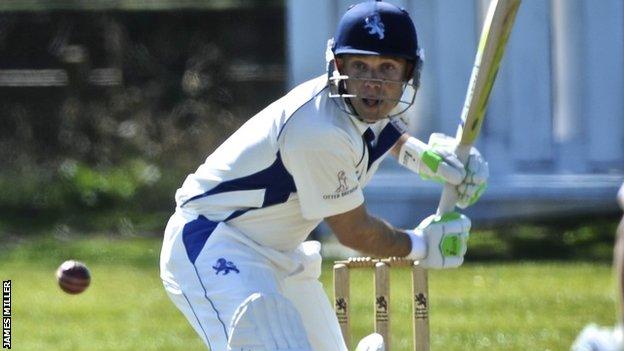 Rain ensured the south west Minor Counties Championship derby between Devon and Cornwall had to be abandoned as a draw at St Austell.

No play was possible on the final day and the game was called off at noon.

Devon had been in the driving seat after Rob Holman and Matthew Thompson hit half-centuries to build a sizeable total of 294-8.

Holman top scored with 79 and Thompson was 77 not out, while Cornwall's Alex Smeeth took 4-60.

"We had a very good day two, so it was very frustrating," Devon director of cricket Roger Newman told BBC Sport.

I'm delighted with the batters at the moment, we're very strong batting side.

"Our plan was to get up to 325 and get the maximum batting points and look to bowl them out twice.

Newman hailed his side's batting performance as one of the main positives to come out of the game.

He added: "Rob Holman did exceptionally well opening the batting and then Matt Thompson and Josh Bess batted beautifully.

"Peter Bradley, on his debut, scored a superb 35 when we were looking to get up to 325 as quick as we could to get maximum batting points.

"I'm delighted with the batters at the moment, we're very strong batting side.

"Now we need to turn to the bowling side and really focus on that and make sure that we get that right ready for the next game and the rest of the games this season."

Devon were one of just two teams in the Western Division to win their first match as they beat Wales in a rain-reduced one innings game two weeks ago.

Rain forced Cornwall's opening match at Hertfordshire to be abandoned after just one day's play.

Devon stay second in the Western Division of the MCCA Championship, nine points off leaders Shropshire, while Cornwall are fifth, four points further back.