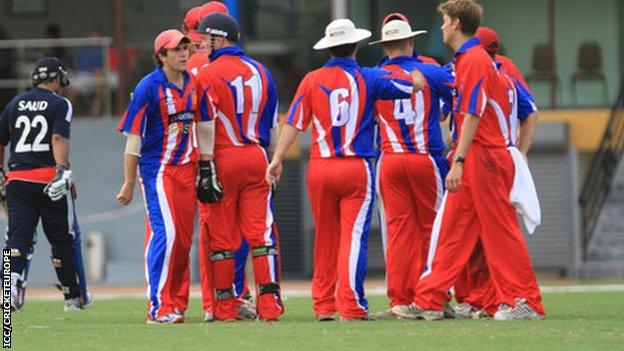 2012 is the first year the island has not hosted a major international tournament since 2009.

"We will play in Division Six next year and there is a possibility that Jersey might host that," Jersey Cricket Board chairman Ward Jenner told BBC Sport.

The island side hosted last hosted a WCL tournament in 2008, when they lost to Afghanistan in the Division Five final.

In the past two years, they have hosted European tournaments, reaching the latter stages of both, and Jenner says home advantage could be key to the island's success because players are less likely to be available when they have to travel elsewhere.

"It can cause real problems for a small nation like us.

"If we get promoted from Division Six next year we may well have to play Division Five in same calendar year and that puts a tremendous stretch on our resources," he said.

"We would take our best squad for Division Six, but they have to take two weeks off work and when you ask them later in the year to play in another tournament sometimes they may not be available.

"We've not encountered it so far but Guernsey have and it's a potential problem for us - and that's a limiting factor for small nations dramatically going up in the World Cricket League.

"Hosting would be an advantage - we know the conditions and we would need less time for acclimatisation for our players.

"It might not be quite so exciting playing at Les Quennevais or the FB Fields rather than somewhere exotic, but if we're looking at what we want to achieve as a nation, it's a big advantage."