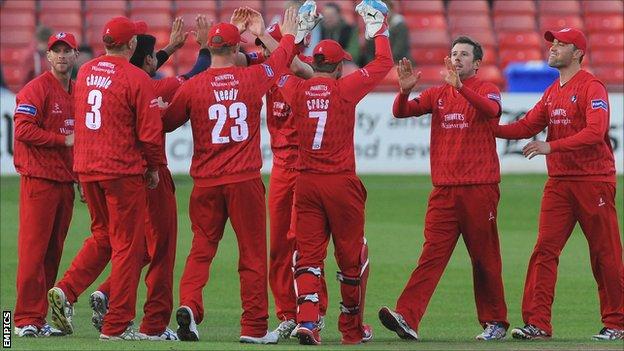 Lancashire may choose not to sign a second overseas player for the FL t20, head coach Peter Moores has said.

Junaid Khan was due to return for the competition after a successful spell at Old Trafford last season.

But the move was called off because of his international commitments with Pakistan, leaving Yasir Arafat as Lancashire's sole overseas recruit.

"I'm very happy with the make-up of the squad but we've got that option," Moores told BBC Radio Lancashire.

"We're not over-burdened with cash until the Test match ticket sales start. We've got a settled batting line-up and we've got some real competition outside of that."

Lancashire, who in 2011 before losing to eventual champions Leicestershire, have made a mixed start to the group stages.

on Thursday was followed by a victory over the Foxes at Grace Road 24 hours later.

Captain Glen Chapple said: "T20 cricket can be like that. You can get on a roll and things start clicking.

"If you play well, you tend to get better fortune as well so that's what we'll be hoping for."

The Red Rose play the return fixture against Leicestershire at Old Trafford on Wednesday evening.