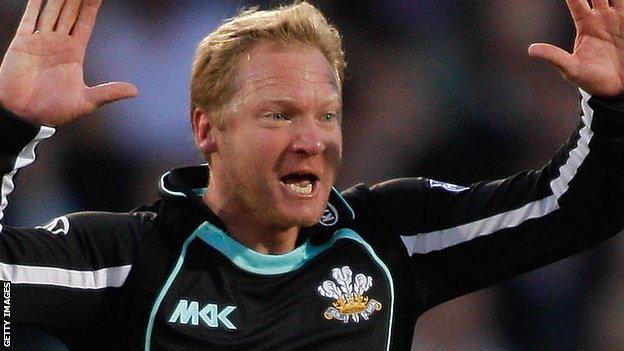 Middlesex were 64-1 before Batty (4-13) took three wickets in four balls and the visitors slumped to 99-8 before rain ended the game early.

Earlier, Surrey slipped to 32-4 as their innings was twice hit by rain.

Rory Hamilton-Brown, Jason Roy and Zander de Bruyn were all out for single-figure scores as Surrey lost four wickets inside the first seven overs, three of them falling in the powerplay.

But Spriegel and Wilson, who both made their highest scores in the tournament, repaired the early damage and set a record fifth-wicket partnership for Surrey in T20 cricket.

It also equalled the best-ever stand for the fifth wicket in the competition's history, matching the 117 set by Martin van Jaarsveld and Matt Walker for Kent against Leicestershire in their 2006 quarter-final.