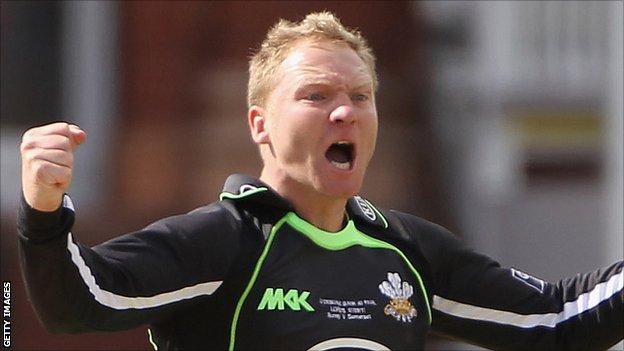 Essex reached 54-1 in reply but lost their next seven wickets for 34 runs.

Napier did the early damage in the Surrey innings, removing skipper Rory Hamilton-Brown and Zander de Bruyn in successive balls in his first over.

Gary Wilson (33) and Jason Roy (22) led the fightback, but they were the only batsmen to pass 20 for the hosts.

England international Ravi Bopara (28) and Mark Pettini (20) gave Essex the perfect start and it seemed as though they would cruise to victory at the Oval.

But their progress was checked by Batty, who removed Bopara, Owais Shah and James Franklin.

Jade Dernbach and Dirk Nannes kept things tight at the end of the innings, as the Essex tail battled in vain to reach their victory target of 129.

"Any time you come to The Oval and bowl a team out for 129, you think you've got a good chance of winning the game.

"At the half-way stage we were confident, but you've still got to go and score the runs and we didn't manage to do that.

"We lost wickets in the middle of the innings and put pressure upon ourselves.

"We've got to work out a way to play in the middle of the game and finish off games."