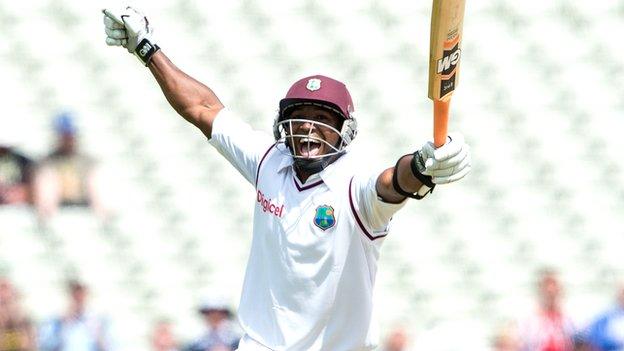 West Indies tailender Tino Best hit the highest score by a number 11 in Test history with a blistering attack on the England bowling at Edgbaston.

He broke Zaheer Khan's record when he passed 75 but missed out on a maiden century when he fell for 95.

Top scores by a number 11 in Test cricket

Best said a documentary film about the great West Indies side of the 1970s and 80s was behind his record knock.

"I have been been watching a lot of 'Fire in Babylon' and it's really inspired me," he said.

Best shared a last-wicket stand of 143 with Denesh Ramdin, the third best in Tests and eight runs short of the world record.

The fast bowler, whose previous highest score in 23 Test innings was 27, smashed 14 fours and one six before getting bogged down in the 90s and spooning a Graham Onions slower ball to Andrew Strauss in the slips.

With his dismissal, the Windies were bowled out for 426, with wicketkeeper Ramdin unbeaten on 107 after making his second century in 44 Tests.

Best's half century was the first against England by a number 11 in 106 years. Only Australian Fred Spofforth (1885) and South African Bert Vogler (1906) had previously passed fifty.

It was also the first Test half century by any number 11 in England for 46 years since John Snow made 59 not out against West Indies.

Best added: "My uncle Carlisle Best, who scored two hundreds against England, always wanted me to be a Test batsman. To fall five short, I know he's disappointed - but still happy I scored 95.

"As I kid I grew up in the dressing room around the legends, and to watch a video of how great, how awesome those guys used to play, I just went out and backed myself.

"I was thinking about when Malcolm Marshall was playing and then when I got to 92 I remembered 'this is my favourite cricketer's highest score, let me just get past him'.

"I feed off Sir Vivian [Richards] and 'Fire in Babylon' is a fantastic film and gave me inspiration, I'm really grateful to do well."

"Best's incredible innings marked a resurrection of sorts for a player whose international career had been blown off course since he was called up to face Australia as a 21-year-old in 2003."

"I feel devastated for him to get out for 95," said former England number 11 Phil Tufnell on BBC Test Match Special.

"It started off as a bit of a laugh and a bit of entertainment, but ended up as a proper partnership."

"Tino Best certainly doesn't look like a number 11, but with this England attack, with no Anderson or Broad, it's the first time in this series they've been found wanting and it's because of the aggression of Best," he told Test Match Special.

"If this match was being played in the Caribbean everyone would have been in the trees or on top of the pavilion, they'd be going mad. People love to see this type of innings. All praise to him."

Best, playing his first Test since July 2009, was only called into the Windies squad for the third Test because of an injury to fellow paceman Kemar Roach.

In his only other tour of England in 2004, Best became a figure of fun after getting stumped aiming a huge heave at Ashley Giles just after being urged to "mind the windows" by England all-rounder Andrew Flintoff.

Flintoff tweeted after Best's innings on Sunday: "Nnnoooooooooo Tino! He went for the windows to reach his 100! Well played sir, great entertainment take a bow."

Former Middlesex and Durham seamer Simon Hughes, another number 11, said: "The spirit and the unexpectedness of it was wonderful - that's the beauty of Test cricket.

"He played and missed at the start and we were all talking about Flintoff and the 'mind the windows' story. We were thinking he might get 15 or 20, then suddenly as a tailender you start to think this is quite good fun and you get your eye in."

England skipper Strauss, who had endured a miserable session, equalled an England Test record when he caught Best.

It moved him level with Ian Botham and Colin Cowdrey on the joint highest number of Test catches for England - the three of them are on 120.