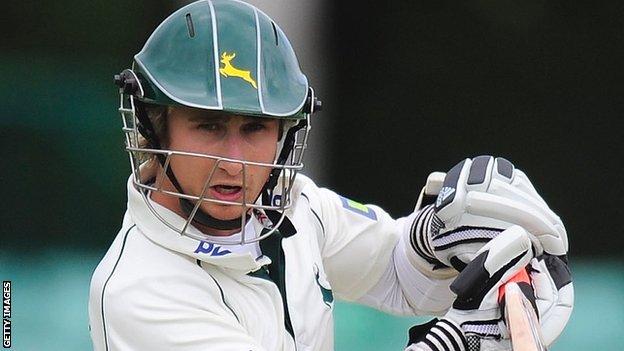 Nottinghamshire had to settle for a draw with Lancashire as they fell short in their final-day run chase.

Captains Chris Read and Glen Chapple forfeited an innings each and Notts allowed the visitors to reach 350-9.

Chris Read (56 not out) and Paul Franks (13 not out) saw Nottinghamshire safely through to the close as the two captains shook hands two balls early.

Notts return to the top of the table, a point clear of Warwickshire who although the West Midlands side have a game in hand.

Lancashire, who still only have one win from nine matches after winning the Championship last season, began the final day of a severely rain-affected match on 321-9.

It quickly became apparent that Read and Chapple had agreed to manufacture a run chase as Notts asked Taylor and Michael Lumb to bowl.

Hogg (61 not out) reached his 14th first-class half-century, while Simon Kerrigan (34 not out) was six runs shy of his highest score.

As soon as Lancashire gained a third batting bonus point they declared, and Chapple was quickly celebrating his first wicket as Alex Hales edged the fourth ball of the innings to wicketkeeper Gareth Cross.

The pair fell either side of lunch but Taylor and Voges dug in to reach tea on 177-4, with a further 174 required for victory.

Notts began to up their scoring rate but saw Voges stumped by Cross off Kerrigan (2-63).

And when Taylor, who scored his first Championsip half-century for Notts, and Andre Adams fell to Shahzad in successive balls, the hosts decided to play for the draw.

"Every credit to Chris Read and Glen Chapple for trying to set something up after three rain-interrupted days.

"In the end, the target was too stiff for Notts and the batting line-up too deep for Lancashire to work their way through.

"Notts remain undefeated after eight Championship games for the first time since 1991 and the challenge will be to maintain that sort of form in the second half of the season."