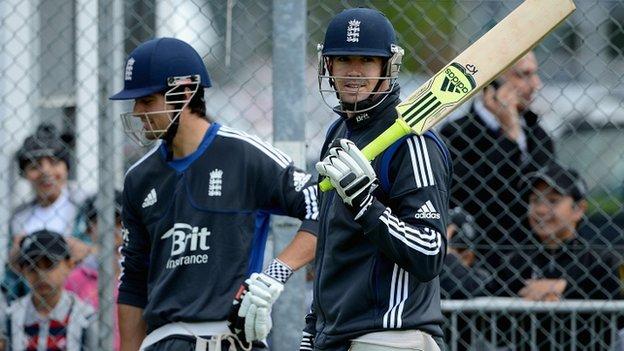 Pietersen unexpectedly called time on his England limited-overs career a week ago, dealing the side a major blow ahead of home one-day series this summer and their defence of the World Twenty20 in Sri Lanka in September.

"For Kevin Pietersen to suddenly drop that in, in the summer, with the World Twenty20 just three months away, I find staggering," Vaughan told BBC Sport.

"I would have thought if you are going to go, why not go on until the end of the World Twenty20? Unfortunately, England will go into that tournament without their best player.

"The one-day and T20 skippers - Alastair Cook and Stuart Broad - will have heard the news and thought 'oh no, please tell me that's not true'."

Pietersen, who scored centuries in his last two one-day innings and was voted player of the tournament at the last World Twenty20, said he was standing down to allow the next generation of limited-overs players to come through in time for the 2015 World Cup.

Batting coach Graham Gooch said England had the talent and resources to find a replacement for the 31-year-old, who opened the batting in the World Twenty20 triumph.

"The selectors will be meeting probably in the next day or so and formulating who they think is the best option up front.

"We've got some exciting young players around - (Craig) Kieswetter, (Jonny) Bairstow, (James) Taylor, (Jos) Buttler - these are all guys who are in and around the Lions and one-day team.

You always have to respect people's decisions, but the consequence is we won't be seeing our best Twenty20 player in the England team

"They are not new names but they are guys I see taking English cricket forward over the next few years."

Pietersen will continue to play Test cricket for England and Twenty20 in the lucrative Indian Premier League (IPL).

He said he would have "readily played" in the World Twenty20 if the England and Wales Cricket Board's (ECB) selection criteria did not insist players make themselves available for both forms of limited-overs internationals.

Vaughan, speaking at Edgbaston where he is summarising for BBC Test Match Special, lamented the fact the two sides could not come to a compromise.

"We don't know what his demands were or what has gone on but there have clearly been talks behind the scenes that have not gone well," added Vaughan.

If you want to rest him, rest him in the one-dayers. There are that many of them, they add up like the dots on dominoes

"He was probably planning for the next year or two, and has asked to be left out of certain [one-day] series. The ECB has probably suggested he miss the IPL and he has said 'no chance.'

"There's no way I would begrudge any player missing that for that amount of money - $2m (£1.28m) for six weeks' work - no-one is going to turn that down. It's just unfortunate they couldn't come to an agreement."

Former England opener Geoffrey Boycott believes there is bad blood between Pietersen and the ECB dating back to his removal as captain in January 2009 after only three Tests.

"I know how people feel when they've been treated shabbily - and Kevin Pietersen was sacked as captain over the phone," Boycott told Test Match Special.

"Don't you think it still rankles with him? Hugh Morris [managing director of England Cricket] talks of disappointment, but he's got no right to expect better treatment than what Kevin was given as captain."

Boycott also hit out at the ECB over the decision to rest James Anderson for the third Test against the West Indies, with England already 2-0 up in the series.

"If you want to rest him, rest him in the one-dayers," he said. "There are that many of them, they add up like the dots on dominoes.

"He's worked so hard to be the leader of the attack, he bowls through niggles because he can win matches for them. He hasn't really been rested, what they really want to do is give Steve Finn or Graham Onions a game."