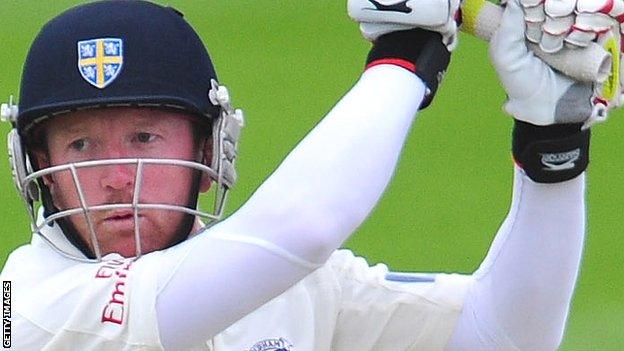 Paul Collingwood grounded out a vital unbeaten 29 as Durham hold a 227-run lead over Warwickshire going into the final day.

Resuming on 28-2, Durham lost wickets at regular intervals until Collingwood came to the crease on 116-7.

The former England man has batted for 90 minutes and has so far put on 31 with Scott Borthwick (15 not out).

Earlier, Durham lost Gordon Muchall for 17 in the fifth over of the day to Woakes, before Keith Barker (2-44) got rid of for 14.

Youngster Jamie Harrison made a patient 23 and Dale Benkenstein hit 21 off 26 balls, including five fours.

Phil Mustard, who made only five, was the only player not to reach double figures during a shortened day's play on Thursday.

"It's hard to say whether the weather has been a source of frustration or relief for the Bears.

"In the 41 overs possible on day three their bowlers performed admirably to take five wickets before lunch to keep Durham in relative check.

"Chris Wright bowled like the wind at times, Chris Woakes's fast leg cutter to get rid of Dale Benkenstein was wonderful and Tom Milnes's boyish enthusiasm in celebrating his first Championship wicket (a punch of the air and skip down the wicket and a jump into a huddle of jubilant team-mates) was a joy to witness. He has potential by the bagful."