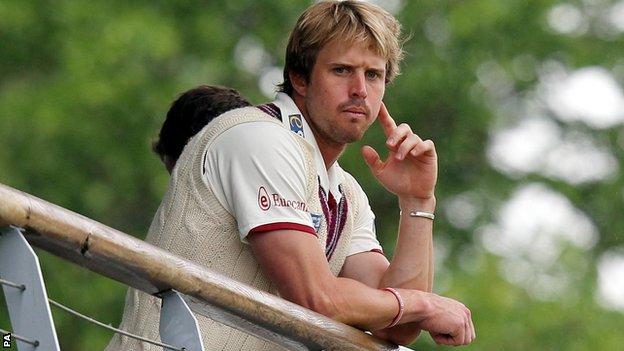 Somerset batsman Nick Compton was denied the chance to complete 1,000 runs in May as rain arrived on day two of their game against Worcestershire.

The stage was set perfectly as Peter Trego took 5-75 to help dismiss Worcestershire for 340, his victims including Vikram Solanki for 106.

And Compton was soon out in the middle when Alex Barrow was caught behind.

But he had made only nine of the 59 he needed as the rain intervened, with Somerset 27-2 when play was called off.

Compton's bad luck means that former Worcestershire and England batsman Graeme Hick remains the last man to score 1,000 first-class runs by the end of May, achieving the feat in 1988.

At the start of play, the 28-year-old was in need of a helping hand from the Somerset bowlers, who had toiled throughout the opening day and only picked up three wickets.

Alfonso Thomas made the initial breakthrough, with the help of Trego's catch at second slip, to send James Cameron on his way.

And after being cut and pulled for boundaries by Solanki as he completed his hundred, Trego took his revenge with a yorker.

The seam bowler added the wickets of Matt Pardoe and Davie Lucas to complete his five-for as Worcestershire's last seven wickets went down for the addition of 70 runs.

Somerset were soon in trouble in reply as Lucas found the edge of Barrow's bat and when Compton reached the crease, the left-armer greeted him with a bouncer.

Arul Suppiah pulled a catch to square leg off Richard Jones before the umpires took the players off just after 14:30 BST and Compton could only watch from the balcony in frustration as the last 53 overs of play were lost to the weather.

"Frustration was the word of the afternoon, for Compton who could not get out there to reach his 1,000 runs before the end of May, and for Worcestershire after a collapse that took away the chance of a massive first-innings score.

"Peter Trego got his reward for a marathon spell on the first day and it was nice to see him raise the ball to the Herefordshire County Cricket club members hosting in the marquee, having spent time with the Minor County when he was out of the first-class game.

"Vikram Solanki's cover-drive is always something to enjoy, but with half a day lost to the rain, it is now difficult to see where this match is going."