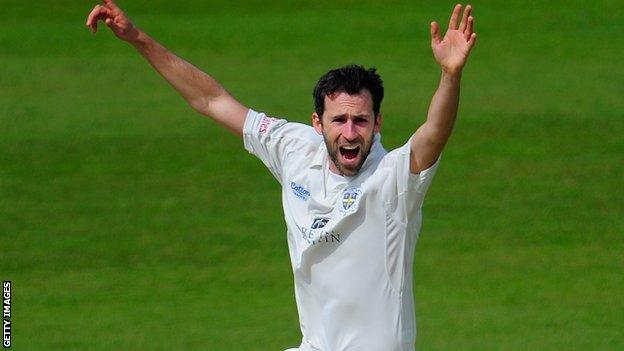 Durham paceman Graham Onions pressed his England claims by completing a five-wicket haul on a rain-ruined second day against Lancashire.

With England considering rotating their seamers for the third Test against West Indies, Onions dismissed last man Simon Kerrigan to finish with 5-43.

Opener Paul Horton carried his bat for 49 as Lancashire were all out for 170.

Trailing by 68, Durham faced just three balls before rain returned, with only 45 minutes of play possible in the day.

After a hectic opening day which saw 18 wickets fall, the bad weather meant it was 15:30 BST before the two teams emerged from the dressing rooms.

Kyle Hogg twice edged Steve Harmison for four before the former England fast bowler had him caught at second slip by Paul Collingwood for 33.

Horton tried to push on for a half century by striking Harmison over cover's head for four and pulling a short ball for another boundary, but he was still one short when Kerrigan edged a catch to Scott Borthwick.

It meant, however, that 29-year-old became the first Lancashire batsman to carry his bat since Alec Swann, the brother of Graeme, made an unbeaten 84 against Hampshire in 1992.

And Horton also had the dubious distinction of equalling Cyril Washbrook's lowest score for a Lancashire opener carrying his bat, the latter's 49 not out made in 1935.

"After a spectacular first day the second was a deeply frustrating one.

"Just a few overs were possible, enough to knock over the Lancashire tail, however Kyle Hogg's 33 in his stand of 49 for the ninth wicket with Paul Horton could prove crucial.

"Horton ended unbeaten on 49, becoming only the seventh Lancashire batsmen in 77 years to carry his bat.

"A lead of 68 could be vital on the evidence of this game so far, batting has proved to be tough, so the Red Rose still with two days to go are in a good position to push on for victory."