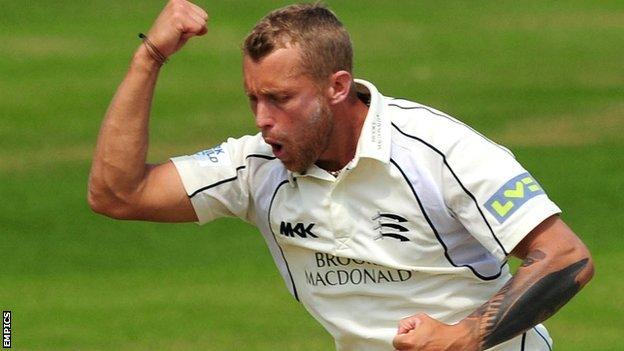 Honours are even between Middlesex and Somerset following a rain-affected first day at Lord's.

Somerset slipped to 1-2 and 45-3 with Corey Collymore, Tim Murtagh and Toby Roland-Jones all taking wickets.

Craig Kieswetter and James Hildreth (58) put on 80 for the fourth wicket, before Hildreth became a 100th first-class wicket for Gareth Berg.

Rain arrived in mid-afternoon and play was called off with Somerset on 130-4, Kieswetter unbeaten on 48.

Only seven points separated the two sides going into this game, with third-placed Somerset having played one more game than Middlesex in fourth.

Chris Rogers won the toss and invited Somerset to bat, a decision that initially paid dividends.

Opener Alex Barrow was out for a third-ball duck with wicketkeeper John Simpson pulling off a stunning diving catch, full stretch in his left glove.

Nick Compton, who last week became the made only one.

Arul Suppiah played on to Roland-Jones for 15, before Hildreth and Kieswetter then put on 80 in 25 overs to recover the situation for Somerset.

Hildreth hit six fours in his three-hour stay at the crease, facing 132 balls, but was caught behind by Simpson as Berg brought up his milestone in his 48th first-class match.

"Middlesex will feel relieved to have removed James Hildreth before the early close after he and Craig Kieswetter led a recovery for Somerset.

"The visitors still have plenty of work to do after they were put in and reduced to 45-3. Much like the Sussex match last week, the new ball appears to be key at Lord's.

"It was an intense morning session and Middlesex may feel unlucky not to have picked up a couple more wickets before lunch.

"To their credit Hildreth and Kieswetter showed great resolve to hold the innings together but, with the partnership broken, the hosts will once again target early scalps on the second morning to restrict their opponents to a below-par total."