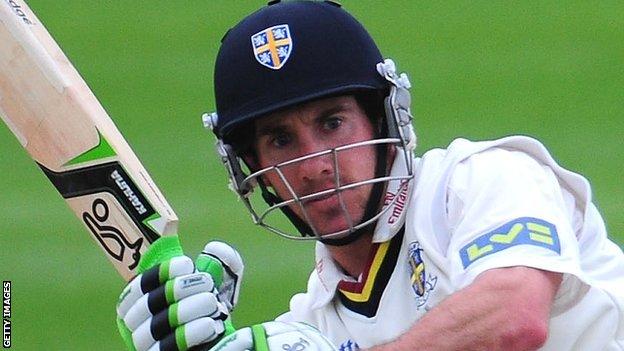 Will Smith passed 5,000 first-class runs as winless Durham had the edge following day one against Warwickshire.

Durham, who are bottom of the table and without a win in seven matches, were in trouble at the start of the day with Mark Stoneman and Gordon Muchall falling within the first 10 overs.

Stoneman became Keith Barker's 27th first-class wicket of the season and 10 balls later, Muchall was caught by Rikki Clarke off Chris Woakes (2-50) for a seven-ball duck.

Smith and Stokes then led a recovery and put on 109 in 39 overs to push Durham into three figures.

Stokes, who spent two and a half hours at the crease, became Wright's first victim as Warwickshire picked up their first bonus point to draw level on points with Nottinghamshire at the top of the Division One table.

Smith followed six overs later, leg before to Wright, three shy of a third half-century of the season.

The latter part of the day was hit by rain but Collingwood and Benkenstein, who were both dropped off the bowling of debutant Tom Milnes, added 78 in 25.1 overs to help Durham to their first batting bonus point at home this season.

Benkenstein fell shortly before the close, caught by Wright of the bowling of Woakes.

"Durham's batting has been fragile this season but, despite the early loss of Stoneman and Muchall, they recovered to earn their first batting point on home soil this season.

"The 109-run partnership from Smith and Stokes was only the third this season past 100. Sadly it came to an end somewhat prematurely when Stokes chopped Wright on and disappeared for 66. Until then he'd shown every sign he was likely to get his second 100 in a week to mark his 21st birthday in style.

"Benkenstein went just four overs from the end, which was disappointing and sadly so is the weather forecast for the next two days as well.

"After seeing Durham struggling for runs and points, it was at least refreshing to see some determination and some signs of improvement."

"The role of the coach of a cricket team has been the source of much debate in recent years but Ashley Giles has proved his worth here.

"With Durham enjoying a century stand, Giles leant out of a radio box window to signal to Chris Wright that he should bowl round the wicket to Ben Stokes. The very next over Wright, having taken the advice, first had Stokes dropped and then induced him to play on.

"But generally it's been hard going in the field for Warwickshire on a slow, dull pitch. Patience is the key for both the batting and bowling side.

"More frustration could be on the way. The local weather forecast suggests we may not get much play over the next couple of days."